Lviv revives Jewish past as Ukraine bids to link with Israel 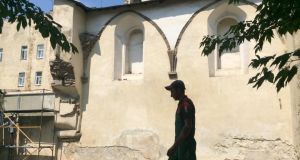 A worker renovating the one surviving wall of the Golden Rose synagogue, built in 1582 and destroyed by the Nazis in 1942. Photograph: Daniel McLaughlin

The glory days of Lviv’s Golden Rose synagogue, like those of the Jewish community in this beautiful Ukrainian city, lie far in the past.

Jews settled in Lviv soon after it was founded in the 13th century, and by the late 1500s two synagogues formed the heart of their quarter in the city centre.

The Golden Rose, designed by an Italian architect in the renaissance style, was considered one of Europe’s most beautiful synagogues, and over the centuries it traded places with the neighbouring Great City synagogue as the main Jewish place of worship in Lviv.

The fortunes of Lviv’s Jews fluctuated with its rulers – Polish kings from the 14th century until 1772, then Austria’s Habsburgs, until Poland retook the city after the first World War – and as anti-Semitism waxed and waned.

Before the second World War, about one-third of Lviv’s 320,000 people were Jewish, and that community doubled in size as Jews fled here from the Nazi occupation of western Poland.

The Nazis captured Lviv and the surrounding Galicia region from Soviet forces in 1941, and forced Jews into a ghetto before sending them to labour and extermination camps. When the Red Army re-took Lviv in 1944, only a few hundred Jews remained in the city and their greatest buildings lay in ruins.

This square on Staroyevreiska (“Old Jewish”) Street will soon look very different, however, as a bright thread of Lviv history is finally brought back to light.

The area will be repaved with stone of different textures to evoke the layout of the Great City synagogue, and grass and trees will be planted where a Jewish study house stood, beside the soon-to-be-restored surviving wall of the Golden Rose.

An installation will present quotes in several languages about Jewish life in Lviv.

German architects will transform Synagogue Square, and Israeli and US designers will create memorial parks at the former sites of a Jewish cemetery and a Nazi concentration camp.

The projects chime with Ukraine’s determination to improve ties with Israel and the global Jewish community, as Russia foments unrest in the country and accuses its pro-western leaders of pandering to fascist elements.

“Currently in Ukraine, and especially in Lviv, there is a great interest concerning the history of Jews,” said Israel’s honorary consul to Lviv, Oleg Vishnyakov.

“More and more people who forgot about their origins during Soviet times are coming back to their roots,” said Vishnyakov, whose consulate opened in May, just as Ukraine’s national airline launched flights between Lviv and Tel-Aviv.

“Many descendants of Galician Jews are now coming to Lviv to find more information about their family history . . . and some of them are staying in Lviv and running their business here.”

Israeli specialists are caring for Ukrainian soldiers wounded in fighting with Russian-backed separatists, and are advising Ukrainian colleagues on how to treat post-traumatic stress problems.

Ukraine’s president, Petro Poroshenko, and Israeli premier Binyamin Netanyahu are expected to visit each other soon, with Kiev keen to buy weapons and Israel perhaps more inclined to agree given its anger over Russia’s planned sale of advanced S-300 missile systems to Iran.

The symbolic value of Israel’s friendship is also crucial for Ukraine, given Russia’s allegations of rampant anti-Semitism; the fact that some Ukrainian militia did collaborate with the Nazis; the small but prominent presence of ultra-nationalists among Kiev’s current forces; and a lingering lack of sensitivity towards minorities.

Alongside the Golden Rose, for example, a Jewish “theme” restaurant’s use of crude stereotypes extends to customers being asked to haggle over the price of their meal.

It was quickly filmed by Russian media before dispersing, and Lviv officials dismissed it as a stunt by pro-Moscow groups to discredit Ukraine.

“Maybe war and crisis can create an opportunity to treat Ukraine as an open concept that we can fill like a patchwork,” she said.

“Lviv is such an important place for Poles and Jews. We can be generous in the way we view its history, and make much better sense of where we all come from.”