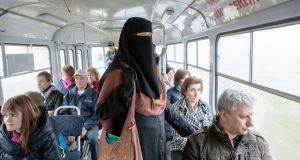 Liga Legzdina, a native Latvian who converted to Islam, on a bus in a suburb of the capital Riga. The government in Latvia is working on proposed legislation that would ban face-covering veils worn by Muslim women from public spaces. Photograph: Reinis Hofmanis/The New York Times 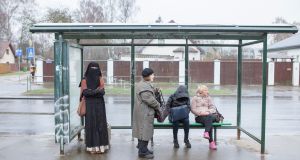 Liga Legzdina, a native Latvian who converted to Islam, waits for a bus in a suburb of Riga. With a tiny minority of Muslims to join the dialogue, the public debate in Latvia has splayed outward to the extremes. Photograph: Reinis Hofmanis/The New York Times 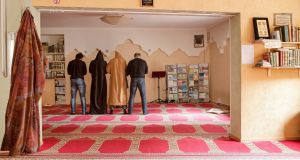 With her niqab, a face-covering Islamic veil that reveals just the wearer’s eyes, Liga Legzdina stands out amid pine trees, grasslands and wood-panelled cottages in the Latvian hamlet of Zaube. Villagers stare. Legzdina is one of a tiny handful of women – generally estimated at three – to wear the niqab in this Baltic nation, whose population of less than two million people includes about 1,000 practising Muslims, according to government estimates.

But for Latvia’s ministry of justice, that is three niqabs too many. Citing a desire to protect Latvian culture and to address security concerns at a time of rising migration to Europe, the government is working on proposed legislation, inspired partly by similar restrictions on head coverings in France, that would ban face-covering veils from public spaces.

The proposal would not ban the wearing of headscarves that do not cover the face, like hijabs, the coverings most commonly worn by Muslim women.

“A legislator’s task is to adopt preventive measures,” said justice minister Dzintars Rasnacs, a member of the anti-immigration National Alliance party, who predicted that the law would win overwhelming backing in parliament and would be in place at the start of 2017.

The legislation in Latvia is one expression of a broader concern about immigration in general and Muslims in particular across central and eastern Europe, as migrants flock to the continent from Afghanistan, the Middle East and Africa. Hungary, Slovakia and Poland have been among the countries most strongly opposed to taking in large numbers of migrants, reflecting anti-immigrant and anti-Muslim strains in their societies. Even in remote Latvia – hardly a top destination for migrants, given its frosty winters and threadbare welfare system – a darkening swirl of fear has emanated from politicians, the news media and the wider population.

Take the case of Legzdina (27), who is not a migrant but a native Latvian who converted to Islam after a trip to Egypt as a teenager. Now a medical student at a university in Riga, the capital, Legzdina, who goes by Fatima, comes to Zaube each spring and summer on vacation with her two young children. Her husband, Viesturs Kanders, followed her into the Islamic faith on their wedding day.

When she is not vacationing in Zaube, she lives in a suburb of Riga, where her daily commute, she said, is becoming littered with verbal abuse. Interactions on buses and trams, she said, often involve her being told to “go back to where you come from”, and tend to end with awkward moments when she replies to the person confronting her in perfect Latvian.

“If they are so afraid,” she said, “it shows they are not strong, and they don’t believe in their own culture.”

Rasnacs, the justice minister, said the law was not about the number of people covering their faces in Latvia, but had more to do with ensuring that prospective immigrants respect the norms of this small and homogeneous country. Sitting by the crimson and white of a Latvian flag during an interview in Riga, Rasnacs added, “We do not only protect Latvian cultural-historical values, but the cultural-historical values of Europe.”

Like other countries in the region, Latvia has been reluctant to take in sizable numbers of the migrants who have arrived on the continent over the last year, with more than one million ending up in Germany. After protracted negotiations, Latvia agreed to accept up to 776 refugees over the next two years, under the European Union’s faltering effort to resettle refugees among all of its 28 member states.

So far, just six of the 776 have arrived. But practical policy questions of housing and integrating the rest remain submerged by increasingly fearful discussions of Islam – propelled by regular news coverage associating the religion with terrorist attacks, sexual assaults and civil wars – and by an absence of historical experience with Muslims among the population, combined with traumatic memories of the country’s past under Soviet rule.

For nearly 50 years, the country had no control over its migration policy, leading to a large Russian-speaking minority.

At the same time, a spokesman for the Latvian Islamic Centre, Roberts Klimovics, has provoked consternation by drawing parallels between the Latvian Nato troops who are fighting in Afghanistan and Mali and Europeans who have traveled to Syria to fight for the Islamic State. He even predicted that Shariah law could be established in Latvia.

In an interview at his farmhouse outside Riga, Klimovics, who is also a filmmaker and a former dating show host on Latvian television, said that his views had left him ostracised, and that the plight of Muslims in Latvia was becoming similar to that of Jews in Germany before the second World War.

“Now, I don’t feel like a local here,” Klimovics said. “I feel like a stranger. Now it is much easier for me to leave.”

This sense of alienation, he said, is the reason that one of his friends, the former chairman of the Latvian Islamic Centre, Oleg Petrov, who now goes by Imran, has gone to Syria to fight for Islamic State. Klimovics said he was disappointed by this decision. “I told him, ‘You were, for me, one of the best people in the world,’” he said, adding that he now viewed Petrov as being “like all those people who kill other people because they think they should control the world.”

Those who have travelled to Syria, though exceptions, are enough to convince many of Latvia’s politicians that the arrival of Muslim immigrants could present new security threats.

“I think that covering one’s face in public at a time of terrorism presents a danger to society,” said Vaira Vike-Freiberga, a former president of Latvia whose family fled the country when it was taken over by the Soviet Union during the second World War. “It’s as simple as that.”

“Anybody could be under a veil or under a burqa,” she said. “You could carry a rocket launcher under your veil. It’s not funny.”