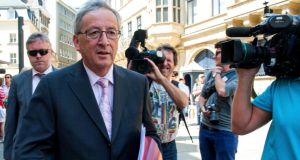 Mr Juncker submitted his resignation to the grand duke of Luxembourg after his party’s coalition partner in government withdrew its support in the wake of a parliamentary report that found Mr Juncker “politically responsible” for failing to inform lawmakers of “irregularities and supposed illegalities” by state intelligence service SREL.

The scandal dates back to 2004 when the illegal phone tapping of senior officials by the secret service reportedly began. The report also found evidence of agents using public money to buy cars, and receiving payments in exchange for access to local officials. Questions also emerged about Mr Juncker’s role in securing an agency job for a driver who was also a former policeman.

Mr Juncker, who chaired the group of 17 euro zone finance ministers from 2005 until he stepped down at the end of last year, has consistently defended his handling of the affair, but was forced to resign after losing the support of socialist coalition partner the LSAP. “We invite the prime minister to take full political responsibility in this context and ask the government to intervene with the head of state to clear the path for new elections,” LSAP president Alex Bodry said on Wednesday during a parliamentary debate on the report.

Mr Juncker has faced domestic criticism in the last number of years for focusing too much on Europe while chair of the euro group. He was succeeded by Dutch finance minister Jeroen Dijsselbloem in January.

Not ‘top priority’
Mr Juncker told parliament on Wednesday that the intelligence service was not his “top priority,” but insisted that he had acted with propriety. “Moreover, I hope Luxembourg will never have a prime minister who sees SREL as his or her priority.”

With Luxembourg required to hold a general election within three months of the dissolution of a government, the election will take place in October. An election had been due in May. It is not yet clear if Mr Juncker (58), will contest the election. His party, the Christian Social People’s Party has long been Luxembourg’s dominant political force, and currently holds 26 out of 60 seats in parliament. The LSAP holds 13.

One possible successor to Mr Juncker is finance minister Luc Friedman, while the current EU commissioner for data protection, Vivian Reding, has also been mentioned as a future leader. Mr Juncker is the longest-serving prime minister in the EU.