In disaster-struck town, a makeshift tent served as a church amid the shattered rubble 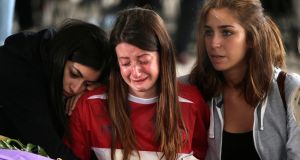 Mourners cry next to a coffin prior the funeral for victims of the earthquake that levelled the town in Amatrice. Photograph: Max Rossi/Reuters 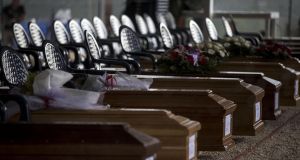 Some of the coffins in a tent for the funeral of victims in Amatrice. The devastating August 24th earthquake in central Italy has left so far a total of 292 dead. Photograph: Massimo Percossi/EPA 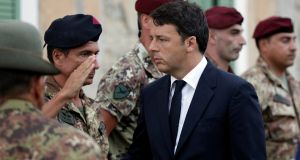 Italian prime minister Matteo Renzi arrives before a funeral service in Amatrice for victims of the earthquake. Photograph: Max Rossi/Reuters

In some ways, the angry, grey sky was in perfect harmony with the sombre mood as the little northern Lazio town of Amatrice on Tuesday held a funeral service for 28 of the 292 victims of last Wednesday’s earthquake. Even as hundreds were gathering for the service, the first of the autumn downpours came, making an already difficult situation all the worse.

As in Saturday’s state funeral in Ascoli, this service began with arguably the most painful moment when the Bishop of Rieti, Domenico Pompilli, read out the names of those in the coffins lined up in front of him. As people recognised their loved one’s name, they sobbed, they nodded their heads and some even screamed their pain out loud. Sometimes, too, the same name came up four or five times in a row where a whole family had been wiped out.

“Earthquakes exist since the beginning of the Earth. Landscapes, mountains, fresh water, we owe them all to earthquakes. Even man would not exist without earthquakes. Yet, it is not the earthquakes which kill but rather the works of man . . . God cannot be used as a scapegoat for this,” said Bishop Pompilli.

Some people sat quietly but others simply could not contain their distress. One couple sat silently on either side of a coffin topped with the photo of an elderly, white-haired lady. A huge wreath of flowers bore a simple message, “Mama, We Love You”.

Fittingly, behind the altar of this improvised chapel, you see three things. First, there are the glorious hills that make this area a summer holiday zone. Second, immediately behind the altar are the ruins of the Don Minozzi orphanage, now an ugly heap of cement, twisted steel and mortar, topped off with a collection of solar panels.

The third thing you see is the statue to Our Lady of the Snows, a local Madonna who normally resides in Preta, yet another earthquake-struck village just down the road from Amatrice. This Madonna is now perched on a large pile of rubble, as a grim reminder of just why we are all here.

There is a crucifix hanging from the stanchion that held up the tented roof. In the far distance you can see the village clocktower, with the clock still stuck at 3.36, the time at which the earthquake struck last Wednesday morning.

There is a strong sense of community here. People fought to have this service held in their own town and not 60km away in the regional centre of Rieti. Police had wanted Rieti because of security considerations linked to the small size of Amatrice, the weather and the threat of aftershocks.

The chapel was so crowded that the VIPs, such as state president Sergio Mattarella and prime minister Matteo Renzi, could hardly make their way down the aisle. Around them, some people hold up white balloons, to recall the children who died in this tragedy. At the end of the ceremony, the balloons were released into the sky while the first two coffins to be carried out were the small white coffins of five-month-old Veralu Ianni and her three-year-old brother Ivan.

At the end of the ceremony, one man on crutches tells those around him how he had urged a neighbouring family to follow him in the chaotic minutes after the earthquake. His neighbours, however, chose another route, with all of them being killed as a building fell on them. The man says he cannot sleep, he keeps seeing his neighbours going down the wrong road.