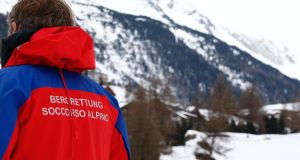 A member of the mountain rescue team during an operation following an avalanche in the Italian Alps. Photograph: Pierre Teyssot/AFP/Getty Images

An avalanche has struck high in the Italian Alps, killing six skiers.

Helicopters ferried both the survivors and the bodies back to the valley floor from the avalanche site, located just hundreds of metres shy of Monte Nevoso’s 3,358m peak.

The mountain is near the Austrian border in Italy’s Alto Adige region.

The dead were among a group of expert back country skiers who were climbing above the tree line to the mountain crest and then skiing down.

The cause of the midday avalanche was not immediately known.

Police in Bolzano and Brunico confirmed the deaths while the news agency ANSA, quoting rescuers, said one other person was injured in the avalanche and eight others survived unharmed.

It said the group included Austrians and Italians.

Police spokesman Albert Castlunger said the survivors had summoned rescuers, who responded with three helicopters and dozens of search-and-rescue workers, who used poles and rescue dogs to probe the snow for more possible victims.

The high altitude and the number of people involved complicated the rescue, Rafael Kostner, the head of the rescue operation, told ANSA.

“The helicopters are having difficulty safely reaching altitudes above 3,000m,” Mr Kostner said.

“They fly with very little fuel and all unnecessary gear is left on the ground.”

Bolzano province’s avalanche report forecast the avalanche risk for Saturday as moderate, a two on a scale of 1-to-5.

It said avalanches were possible on leeward slopes near ridges, with the risk rising throughout the day.