Dubliner (31) held on suspicion of membership of organised crime group 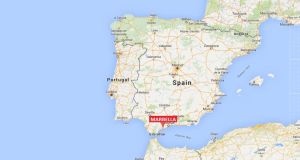 Five British men and an Irish woman have been arrested in Spain’s Costa del Sol in a police operation against organised crime in Salford.

Dawn raids took place in Marbella on Tuesday when three men from Salford, England – aged 28, 25 and 20 – were arrested on suspicion of conspiracy to commit murder, possession of a firearm and membership of an organised crime group.

A 41-year-old man from Trafford, Greater Manchester, and a 31-year-old woman from Dublin were also held on suspicion of membership of an organised crime group.

The arrests were carried out by Spanish police with support from their counterparts in Greater Manchester and also the National Crime Agency.

Two properties were raided as part of the operation as officers also recovered a loaded handgun, ammunition and four knives.

On Wednesday, a 23-year-old man from Salford was also arrested in Marbella on a European Arrest Warrant on suspicion of possession of class A drugs with intent to supply.

“We would like to thank the Spanish National Police and the National Crime Agency, once again they have shown their determination to relentlessly pursue criminals and fugitives who seek to use Spain as a base for their criminal activities.

“Our commitment to tackling serious organised crime in Salford will continue and we will use all of the powers and information available to us and our partners to target this criminality round-the-clock and put a stop to it for good.

Dave Allen, head of the International Crime Bureau at the UK’s National Crime Agency, said: “Law enforcement does its best work and has the most impact when it pools resources and works collaboratively.

“This is an excellent result, which shows the determination and professionalism of the Spanish National Police, the National Crime Agency and UK police forces, in targeting organised crime groups and fugitives who seek to use Spain as a base for their criminal activities.”