Ireland to participate in migrant search and rescue mission 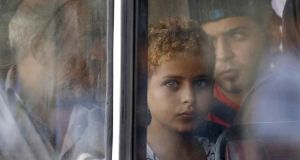 Migrants are transported to the armed forces of Malta Maritime Squadron base at Haywharf in Valletta’s Marsamxett. Up to 900 people may have died in last Sunday’s disaster off the coast of Libya. Photograph: Reuters

Ireland is to participate for the first time in an EU search and rescue mission, following the Government’s decision to send a fully crewed ship to the Mediterranean to help with the rescue of migrants fleeing north Africa.

The ship could be dispatched within weeks, officials said, and will work alongside Triton, the EU’s search and rescue mission in the Mediterranean.

EU leaders have agreed to triple the funding allocated to Triton, with German chancellor Angela Merkel pledging to commit more money if necessary, in order to alleviate the humanitarian crisis in the Mediterranean.

“If we need more money we will put up more money. We will not fail because of lack of funds,” the German chancellor said in Brussels.

No decision was made on Ireland’s participation in a voluntary resettlement programme for refugees, however.

A pilot resettlement programme for migrants - which would involve moving people from refugee camps outside EU territory to countries within the European Union - was agreed in principle.

While leaders had been expected to commit to a figure of 5,000 refugees, no target figure was agreed, despite a plea from Jean-Claude Juncker during the meeting to resettle 10,000 migrants.

Informed sources said that the Irish Government is likely to give “strong consideration” to participation in any EU resettlement scheme as it develops in the coming months.

Speaking in Brussels ahead of the summit, British prime minister David Cameron ruled out Britain’s participation in a resettlement programme, though Britain will contribute three ships and three helicopters to the rescue mission in the Mediterranean.

Announcing the decision to send an Irish naval vessel to the Mediterranean, Taoiseach Enda Kenny said that the European Union’s priority should be the humanitarian crisis.

“This is a case of protecting innocent people who are fleeing from areas of war and terror. Politics and political leadership is about creating solutions to these problems. People are entitled to live,” the Taoiseach said on his way into the summit.

The Taoiseach is understood to have raised Ireland’s own experience of the so-called “coffin ships” that carried Irish famine victims across the Atlantic in the 1840s during the closed-door meeting.

The European Union has been struggling to forge a united response to the migration crisis currently sweeping across the Middle East and north Africa as desperate migrants flee their homes for refuge in Europe. More than 1,000 people are estimated to have died in the last week alone in the Mediterranean.