Order to withdraw some 50,000 tonnes of implicated meat from two Dutch wholesalers 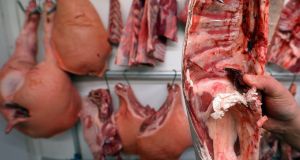 About 370 companies in other European countries have also bought the meat, and the Dutch food authority has warned foreign counterparts about the recall via a European rapid alert system.Photograph: Jeff J Mitchell/Getty Images

An investigation into the possibility that an Irish company has received more beef products containing horsemeat was launched today by the Department of Agriculture.

The probe comes as the European-wide scandal in the beef industry was reignited - with Dutch authorities ordering the withdrawal of about 50,000 tonnes of beef from sale over concerns it might contain horsemeat.

The Department of Agriculture confirmed tonight it is “following up enquiries” from the Dutch authorities in relation to the supply of beef to an Irish company from a Dutch supplier which is “under investigation” there.

It’s understood the Department’s investigation is in its infancy but that it will liaise with the Dutch authorities and attempt to establish exactly how much - if any - of the product is in the country, and the extent of any possible contamination.

The Netherlands Food and Consumer Product Safety Authority said it had told more than 130 Dutch meat-processing firms to trace the meat and withdraw it.

About 370 companies in other European countries have also bought the meat - and the Food Safety Authority of Ireland was informed this morning that one Irish meat processing plant was among them after it was contacted by the European Commission.

This was done via the European Rapid Alert System for Food and Feed, which is a circular email to all member states “to exchange information...where a risk to human health has been identified and measures have been taken”.

Inspectors examining his records found that the origin of the meat supplied was unclear. The Dutch authorities said that because the exact source of the meat cannot be traced, “its safety cannot be guaranteed”.

They said it was impossible to confirm slaughterhouses had been acting according to procedure and that it did not know where the meat had ended up, but that it could have been used in frozen products.

“The buyers have probably already processed the meat and sold it on,” they said. “The buyers, in turn, are obliged to inform their own customers.” They added that they currently have “no concrete indications that there is a risk to public health”.

The recall covers meat dating back to January 1, 2011, up until February 15 this year, when the companies at the heart of the recall were placed under heightened scrutiny and faced criminal investigations.

The Dutch authorities conceded that because the recall dates back more than two years, some of the meat “may already have been consumed”.