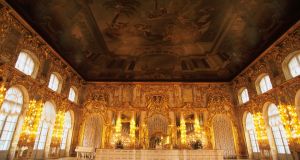 Seven decades after it vanished, the hunt is on again for the famed Amber Room, stolen by the Nazis from Leningrad in 1941.

Two German treasure hunters claim the priceless room panels, gifted by Kaiser Friedrich Wilhelm to Tsar Peter the Great 300 years ago, were hidden in the cellar of a Bohemian Castle at the end of the second World War – and that the Czech authorities have covered up their priceless trove for decades.

Czech authorities have rejected the claim, the latest in a long line of theories about the whereabouts of the most sought-after of artwork looted by the Nazis.

The Amber Room was created originally for Charlottenburg Palace in Berlin but instead was packed in 18 boxes and shipped to St Petersburg. After several stop-offs its last home in Russia was Catherine Palace, in what is now Pushkin, where the final version of the dazzling chamber comprised six tonnes of amber that covered 55sq m (590sq ft) of wall space.

When the Nazis invaded the Soviet Union in 1941, Amber Room guardians tried unsuccessfully to hide the panels behind wallpaper. Nazi art specialists ordered the room disassembled and shipped to Königsberg – today’s Kaliningrad – and it went on display in the city palace.

When Königsberg was bombed by the Allies in April 1945, curators claimed the Amber Room was destroyed along with the palace – an assertion supported by two British investigators in 2004.

A year earlier, in 2003, a replica Amber Room opened in St Petersburg. However, the hunt for the original continues: in Königsberg, in mines under the western German city of Wuppertal and in eastern Germany’s Harz mountains.

In February 1945, weeks after Adolf Hitler ordered the Amber Room’s evacuation from Königsberg, the cook noticed scores of SS men disappearing into the castle with unmarked crates. Every night for two weeks, she said, they carried their deliveries into the cellar – and then vanished.

After hearing this, German treasure hunters Erich Stenz and Georg Mederer visited the castle and noticed two cellar vaults had been walled in with modern bricks and cement.

They say Czech officials at first denied the castle had a cellar then, after being shown photgraphs taken by the two men, claimed it contained books from a Berlin library.

When the treasure hunters were given permission to look again, they say castle officials prevented them using special equipment to see what lay behind the modern walls.

“The whole thing stinks,” said Mr Stenz to the Süddeutsche Zeitung daily. “The Czechs are afraid that it will come out that they’ve kept silent on this for decades.”

The two German treasure hunters also claim to have found a document from senior Nazi Martin Bormann that confirms their Amber Room theory. The document’s reference to “where Matthias strokes the strings” is a cryptic reference, they claim, to Frydlant Castle’s former owner Matthias Gallas.

“It all fits,” said Mr Mederer to the Süddeutsche. “It’s mad.”

Mad it is, claim the Czechs. And, after seven decades missing, the hunt for the Amber Room continues.