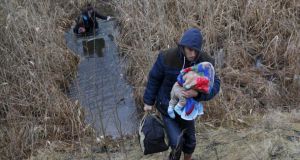 The Hungarian government has ordered the interior ministry to ‘prepare for closure of the Hungarian-Serbian border by next Wednesday; this will be achieved by erecting a four-metre-high fence’ along its 175km length. Photograph: Laszlo Balogh/Reuters

Hungary plans to build a security fence along its entire border with Serbia to halt the flow of illegal migrants, despite domestic and international criticism of its handling of the issue.

Officials say more than 53,000 people – mostly Syrians, Iraqis and Afghans – have lodged asylum requests in Hungary this year, compared with 43,000 last year and 2,157 in 2012. Most file a request before moving west, however, and prime minister Viktor Orban has been accused of taking a harsh line against refugees to counter the rise in popularity of Hungary’s far-right Jobbik party.

Mr Orban’s office said yesterday the government had ordered the interior ministry to “prepare for closure of the Hungarian-Serbian border by next Wednesday; this will be achieved by erecting a four-metre-high fence” along its 175km length.

“The government has also given instructions for completion of the necessary preparatory legal work to enable Hungary to classify all EU member states and candidate countries as safe countries,” Mr Orban’s office said in a statement.

By deeming its Balkan neighbours to be “safe”, Hungary seems to be seeking to avoid any obligation to accept asylum seekers who are citizens of those countries, and may also be trying to undermine the EU’s so-called Dublin regulation, which states that migrants should remain in the first EU country that they enter.

“The pressure of migration, which presents serious difficulties for Europe, affects Hungary the most among EU member countries,” said foreign minister Peter Szijjarto.

“Hungary cannot afford to wait any longer. Naturally, we hope there will be a common European solution.”

There was no immediate response from Belgrade, but Hungary said it would give “detailed information” on the measures to Serbia at an intergovernmental meeting on July 1st.

Mr Orban has rejected an EU plan to distribute refugees among member states as “mad and unfair”, and this month warned against making an “irreversible” mistake on migration that could “change the face of Europe’s civilisation”.

He has also initiated a “consultation” with the public on migration, but a questionnaire sent to Hungarian households was denounced by rights groups and the European Parliament. They said the questionnaire blurred the distinction between refugees and economic migrants, and asked leading questions such as whether “mismanagement of the immigration question by Brussels may have something to do with increased terrorism”.

Mr Orban’s government has also erected billboards around the country, with slogans such as “If you come to Hungary, you can’t take Hungarians’ jobs”.