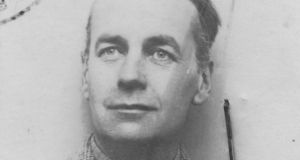 Balkan days: Hubert Butler, in a photograph from identity papers in 1947, around the time he was in Zagreb attending war-crime trials. Photograph courtesy of Julia Crampton/Maidenhall Manuscripts 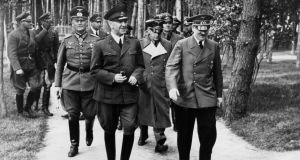 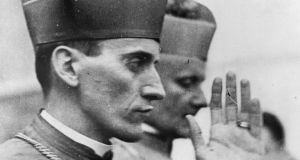 Balkan days: Alojzije Stepinac around 1937, when he was made archbishop of Zagreb. Pope John Paul II beatified him, but his path to sainthood has been blocked. Photograph: Hulton/Getty

A new documentary on RTE One at 10.35pm on Tuesday, The Nuncio and the Writer, looks at how Hubert Butler clashed with the Papal Nuncio in 1952, for exposing the appaling behaviour of Ante Pavelic in the Nazi puppet state run in Croatia by the local fascist Ustashe militia. This article, from 2016, discusses the Kilkenny man's extraordinary legacy

It is no insult to Kilkenny’s market gardeners to assume that few of them will have a concerned eye on the Balkans ahead of tomorrow’s parliamentary election in Croatia. Hubert Butler would have done. For him work in the orchards of the family home near Bennettsbridge was enlivened by travels through a war-ravaged Europe and a writing career that has seen him belatedly hailed as Ireland’s George Orwell.

Born in 1900, Butler studied at Oxford University before teaching English in Soviet Leningrad and translating Chekhov, helping Jews escape Nazi-controlled Austria and investigating the deportation of children in Vichy France.

Until his death, in 1991, he also devoted great time and energy to the Balkans, learning Serbo-Croat and writing extensively on the horrors that befell Yugoslavia when Hitler’s forces invaded in 1941.

At concentration camps such as the infamous Jasenovac, the Ustashe slaughtered probably more than 300,000 people – mostly Serbs but also Jews, Roma and the movement’s political opponents.

A new collection of Butler’s writing, called Balkan Essays, includes his description of Pavelic as “the epitome, the personification of the extraordinary alliance of religion and crime, which for four years made Croatia the model for all satellite states in German Europe”.

The Ustashe sought to forge a Croatia that was “pure” not only racially but also spiritually, and launched a ruthless campaign to forcibly convert Orthodox Serbs to Catholicism – with fervent support from much of the nation’s church hierarchy.

As archbishop of Zagreb, Cardinal Alojzije (or Aloysius) Stepinac was the religious leader in wartime Croatia, and he was swift to confer blessings on Pavelic and the Ustashe; later he distanced himself from some of its excesses, but he never broke with or publicly denounced the murderous regime.

After the war Pavelic and other leading Ustashe fled, and Yugoslavia’s new communist rulers gave Stepinac a 16-year jail sentence for collaboration.

Butler wrote of the cardinal’s good fortune not to be tried at Nuremberg, “where German generals were sentenced to death for crimes of which many of them knew much less than [he] knew of the unspeakable atrocities which his bishops, his priests and his monks committed against the Orthodox”.

The essayist attended war-crime trials in Zagreb and even once held a brief interview with the imprisoned Stepinac, whom he acknowledged had made “many brave sermons in defence of Jew and Orthodox”.

“But unquestionably,” Butler continued, “his conciliatory attitude influenced others who were not capable of his restraint”, and so Pavelic, the man “responsible for the attempted extermination of the Serbs as well as the Jews in Croatia, was received with rapture in convents and monasteries and ecclesiastical seminaries, as well as being idolised in the Catholic press”.

As the cold war took hold Butler watched in appalled fascination as the vicar of Croatia’s fascist butchers was transformed in many western eyes into a brave martyr for religious freedom, persecuted by Marshal Tito’s cruel communists.

In Ireland Stepinac became something of a cause celebre for outraged clergy and politicians who could scarcely have found Zagreb on a map and had little or nothing to say about the atrocities perpetrated by the cardinal’s wartime friends.

“It was as though after six years of discreet silence, we had at last found a subject about which we could safely vent our repressed indignation,” Butler wrote. “Croatia is a remote, little-known part of Europe, and this made it very strange that our press, our parliament, our county council, which had been silent when one country after another had been overrun by Germany, should suddenly pass resolutions of protest in the strongest and boldest language.”

When Butler sought to inform a public meeting about forced Catholic conversions in wartime Croatia the nuncio to Dublin stalked out of the hall, and the essayist found himself ostracised by the national and local establishment – even being forced to resign as secretary of Kilkenny Archaeological Society.

Butler continued writing, however, and he also investigated how Pavelic’s fugitive interior minister, Andrija Artukovic, had managed to live quietly in Dublin in 1947-48 on false Irish papers before fleeing across the Atlantic; Butler’s riveting writing on the mystery is included in Balkan Essays, which is published by the Irish Pages Press with the support of the Lilliput Press in Dublin.

Stepinac died in 1960, but his posthumous status was transformed by the end of communist rule and the bloody collapse of Yugoslavia in the early 1990s.

The ultranationalists who led Croatia to independence through a vicious war with Serb forces between 1991 and 1995 revered Stepinac, and some saw themselves and their new country as heirs to the legacy of Pavelic and the Ustashe state.

More than two decades later Croatia is a member of the European Union and Nato, but its politics keep circling around its darkest periods of the 20th century.

Disputes between the right-wing HDZ party and leftist Social Democrats have only grown more bitter with the approach of election day, and relations with Serbia are fractious after a Zagreb court quashed Stepinac’s 1946 treason conviction.

The court ruled in July that Stepinac’s trial sought to “morally discredit him and the Catholic Church” and said that the verdict “grossly violates basic principles of criminal law both then and now”.

Efraim Zuroff, director of eastern European affairs for the Jewish human-rights organisation the Simon Wiesenthal Centre, said Stepinac’s responsibility was “to speak out on behalf of the innocent victims of the Ustashe, not to lend spiritual support to their murderers . . . No person who supported that regime should have their conviction annulled.”

Serbia’s anger was compounded just days later, when Croatia’s supreme court quashed the 2010 conviction of a far-right former deputy, Branimir Glavas, over the torture and murder of Serb civilians at the start of the war in 1991.

Leaders of Croatia’s Jewish, Serb and Roma communities boycotted this year’s official commemoration at the site of the Jasenovac concentration camp over what they saw as the HDZ’s attempts to whitewash wartime history.

The HDZ-led ruling coalition rejected the claims and lambasted Serbia’s rehabilitation last year of Draza Mihailovic, an ardent Serb nationalist who was executed by Tito’s authorities for collaborating with the Nazis.

Many Serbs lionise Mihailovic and his “Chetnik” militia as patriotic fighters against Tito’s communists, and, like Pavelic and the Ustashe in Croatia, they inspired their side’s most vicious killers during the 1990s Balkan wars.

Tomorrow’s election is unlikely to give any party a clear majority, leaving Croatia split as Balkan states again dredge through their bloody and divisive past.

A swift decision from the Vatican on Stepinac’s record is likely to prove equally elusive.

Pope John Paul II controversially beatified Stepinac in 1998, but his path to sainthood is now blocked by a commission of Catholic and Orthodox prelates from the Balkans that Pope Francis has tasked with investigating his record.

Chris Agee, the editor of Irish Pages literary journal, believes that the market gardener of Bennettsbridge could now have a say in Stepinac’s fate.

“Whether any of the Croatian hierarchy takes any ethical account of Balkan Essays remains to be seen – but perhaps this is beside the point,” Agee writes in his introduction to the new collection of Hubert Butler’s essays. “What seems possible is that the Vatican might – especially through the Stepinac commission . . . You cannot, of course, make mistakes with future saints.”

Balkan Essays is published in Ireland on September 26th. It will feature at a screening of Johnny Gogan’s film Hubert Butler: Witness to the Future on Friday, November 11th, as part of Dublin Book Festival