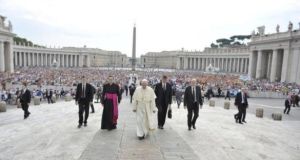 On the eve of the Synod on the Family, the Holy See was rocked on Saturday morning by the public coming out of 43-year-old Monsignor Krzysztof Charamsa, a senior official at the Vatican’s Congregation For the Doctrine Of The Faith (CDF), ex-Holy Office. File photograph: Osservatore Romano 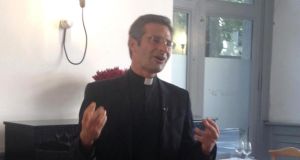 Monsignor Krysztof Charamsa, second secretary of the Vatican’s International Theological Commission, who has announced that he is gay. Photograph: EPA

On the eve of the Catholic’s Church’s Synod on the Family, the Holy See was rocked on Saturday by the public coming out of 43-year-old Monsignor Krzysztof Charamsa, a senior official at the Vatican’s Congregation For the Doctrine Of The Faith (CDF), ex-Holy Office.

In an interview in Saturday’s Corriere Della Sera, timed to coincide with Sunday’s opening of the Synod, Monsignor Charamsa declared himself to be gay.

“I want the Church and my community to know who I am - a homosexual priest, happy and proud of his own identity.

“ I am ready to pay the consequences of this but the moment has come for the Church to open its eyes to gay believers and to understand that the solution which it offers to gays, namely total abstinence from a love life, is simply inhuman.”

Monsignor Charamsa, who has been in Rome for 17 years, is a senior official at the CDF and a theology lecturer at the prestigious Jesuit-run Gregorian University in Rome.

Later on Saturday he will attend a meeting of the Global Network of Rainbow (LGBT) Catholics in Rome which will also be attended by former Irish president Mary MacAleese is due to give a public interview on the theme of “Catholic Encounters with LGBT People and their Families”.

Monsignor Charamsa said on Saturday there was a day when “something breaks inside you”, adding that God guided him to this decision, “which should be the most simple for any homosexual”.

“I will personally reveal my identity to the Holy Father with a letter. And I will inform the universities where I teach as to who I am. (I do this) with immense regret since I will probably no longer be allowed to teach in Catholic schools.”

In relation to the Synod, which was already certain to have had the Church’s pastoral approach to homosexuality on its agenda, Monsignor Charamsa said: “I would like to tell the Synod that homosexual love is a family love and one that needs the family. Every person, including gays, lesbians, transexuals desire love and a sense of family.”

Asked how he deals with Catholic teaching which defines the practise of homosexuality a “sin”, Monsignor Charamsa replied: “The bible never talks about homosexuality. Instead it talks about acts which I would call ‘homogenital’, acts which can be carried out by hetrosexual people, as happens often in prisons.

“In that case, these acts may be a moment of infidelity to one’s true nature and thus a sin. Those same acts carried out by homosexuals, however, express their true nature. The biblical sodomite has nothing to do with two gays today in Italy who love one another and want to get married.”

Acknowledging the serious consequences his coming out is likely to have, including his eventual laicisation, Monsignor Charamsa said he was not doing this so that he would be free to live with his partner.

The reason was much bigger, he said. “I think that on these issues (homosexuality), the Church is way behind in relation to the level of understanding reached by humanity”.

The Holy See’s reaction to Monsignor Charamsa’s interview was immediate with senior spokesman Father Federico Lombardi calling him irresponsible for having made “such a pointed statement on the eve of the opening of the Synod” saying it would place the Synod under undue media pressure.

“Monsignor Charamsa will certainly be unable to continue to carry out his previous work in the Congregation for the Doctrine of the Faith and the Pontifical universities, while the other aspects of his situation shall remain the competence of his diocesan Ordinary.”