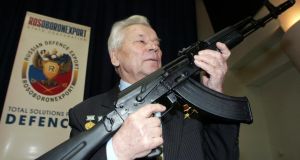 A 2006 photograph of Mikhail Kalashnikov, the designer of the assault rifle that has killed more people than any other firearm in the world, who died today aged 94. Photograph: Sergei Karpukhin/Files/Reuters.

Mikhail Kalashnikov, the designer of the assault rifle that has killed more people than any other firearm in the world, has died today aged 94.

Kalshnikov, who was in his 20s when he created the AK-47 just after World War Two, died in his home city of Izhevsk, near the Ural Mountains, where his gun is still made, Russian state news agency Itar-Tass reported, citing a spokesman for the province’s president.

A self-taught designer, Kalashnikov sent the Avtomat Kalashnikova-47 – AK-47 for short – into production in 1947.

Durable, reliable, adaptable and light, the gun was exported in huge numbers, initially to the armies of states friendly to the Soviet Union.

Its low cost and ease of use gradually made it the weapon of choice for guerrillas, militias and, indeed, criminal gangs.

The Provisional IRA made extensive use of AK-47s, many of them supplied by the Libyan leader Muammar Gadafy in the 1980s, during the conflict in Northern Ireland.