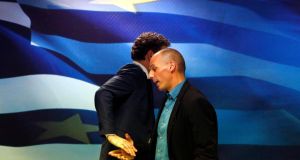 Greece has rejected any further dealings with the troika, sparking fears of major tensions in negotiations with Europe in the weeks ahead and potential financial upheaval.

The new government does not plan to deal with the troika – the EU Commission, ECB and IMF – the country’s finance minister, Yanis Varoufakis, told the head of the eurogroup of euro zone finance ministers on Friday. He also said that Greece will not seek an extension of its current bailout programme, due to run out at the end of February, and instead called for a debt deal negotiated between Europe’s governments.

The move raises questions about Greece’s ability to make debt repayments after the bailout programme runs out. It also threatens the future of ECB funding for its banking system, which is reliant on its agreement with the troika.

Speaking at the close of a tense press conference with the head of the eurogroup, Jeroen Dijsselbloem, the Greek finance minister announced that while his government would seek the “best possible agreement” with the “statutory, legal institutions” of the euro zone, EU and IMF, it would not deal with the troika as a group.

“We do not aim to work with a tripartite committee whose objective is to implement a programme which we consider to have an anti-European spirit and that according to the European Parliament is a committee built on shaky foundations,” the Greek minister said.

Mr Varoufakis, an economics professor who has written extensively against his country’s memorandum since it was signed in 2010, said his government had to respect its winning election platform.

He said that Greece did not want to extend its current bailout programme. Instead Greece wants a wider agreement with European governments, involving a write-down of some of its official debts.

However, German finance minister Wolfgang Schauble said yesterday that Germany would not be subject to “blackmail” from Greece and Mr Dijsselbloem rejected its calls for a debt conference to examine the wider question of debt burdens in Europe.

Officially, a final €7.2 billion payment to Greece depends on the agreement on a new bailout being made. Without an agreement with the troika, Greece’s banks could be shut out of funding from the ECB, a fear already sparking deposit withdrawals.

In an interview yesterday, Mr Varoufakis said he was not seeking the final payment tranche but to “restructure the debt and the economy to get the money we need”.

At the press conference, a tense-looking Mr Dijsselbloem raised his eyebrows and shook his head in apparent surprise after hearing Mr Varoufakis’s rejection of the troika. After an awkward handshake, both men left the meeting without exchanging a word.

Earlier, Mr Dijsselbloem, who also had talks with prime minister Alexis Tsipras, said it was up to the Greek government “to determine its position towards us and to move forward together”. He warned against Athens taking unilateral action.

One analyst said that the Syriza-led coalition had made its position clear. “It wants to turn the way Greece co-operates with the euro zone on its head. Instead, it wants to submit its own reform programme in return for debt relief and lower primary surplus targets,” said Nick Malkoutzis, of website MacroPolis.gr.

“The problem is that making this switch will require goodwill from the euro zone.”