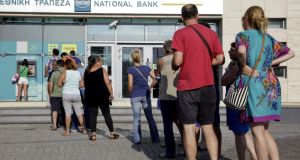 People line up to withdraw cash on the Greek island of Crete on Sunday. Photograph: Stefanos Rapanis/Reuters.

Greek banks will remain shut for an unspecified time and the country is imposing restrictions on bank withdrawals following a recommendation by the Bank of Greece, the country’s prime minister has said.

The Greek financial stability council, meanwhile, has recommended keeping bank machine’s shut on Monday and limiting withdrawals to €60 a day once they reopen on Tuesday, a source who took part in the council’s meeting said.

The recommended limit will apply to holders of Greek bank cards. Foreign card holders will be allowed to withdraw the maximum limit set by their banks, the source said on Sunday.

Prime Minister Alexis Tsipras earlier announced a bank holiday and capital controls after Greeks responded to his surprise call for a referendum on bailout terms by taking money out of banks. For the capital controls to take effect, they must be approved by the Greek cabinet and then enacted through a presidential decree. “The council recommended a bank holiday of six working days until

Monday night next week. ATMs will not operate tomorrow, will open again on Tuesday,” the source said.

Sunday’s moves come after two days of long lines forming at ATMs across the country following Mr Tsipras’s sudden decision to call a referendum on creditor proposals for Greek reforms in return for vital bailout funds.

An emergency meeting of the country’s financial stability council agreed to impose capital controls, which would restrict how much money savers can withdraw from their accounts, to ease pressure on the banking system.

The stock exchange in Greece will also remain closed on Monday.

With the support of our people, we will reject the ultimatum before us that is an affront to Europe's democratic traditions. #Greece #vouli

The European Central Bank has said it will maintain its emergency funding of Greek banks at the level agreed on Friday but will not provide any additional assistance.

The ECB said it would work closely with the Bank of Greece and stood ready to review the decision on its Emergency Liquidity Assistance.

The country’s parliament has backed a decision by Mr Tsipras to hold a referendum on a proposed bailout package next Sunday.

“We don’t need to ask permission from Mr Schäuble or Mr Dijsselbloem to let the voice of the Greek people to be heard,” Mr Tsipras tweeted. “We will be holding the referendum next Sunday, honouring the sovereignty of our people and our future.”

The decision by the Greek parliament to press ahead with the ballot came just hours after euro zone finance ministers rejected a request by Athens to extend the current Greek bailout past Tuesday.

Speaking after yesterday’s eurogroup meeting - which saw the 18 euro zone finance ministers reconvene after Greek finance minister Yanis Varoufakis had left the gathering - euro group chairman Jeroen Dijsselbloem said that ministers were making preparations to protect the resilience of the euro and were ready to make “full use of the instruments available”.

The Syriza party has already indicated it will vote ‘No’ to the referendum, though it still remains unclear what the Greek public will be asked to vote on given that the bailout package will expire on Tuesday night.

A previous referendum called by former prime minister George Papandreou four years ago was cancelled after the then-government reached agreement with bailout creditors.

The referendum announcement on Friday stunned creditors. Minister for Finance Michael Noonan said yesterday that he had expected to continue negotiations on the bailout at a meeting in Brussels, noting that there had been some common positions between the two sides. But the decision by Greek negotiators to “unilaterally” withdraw from the discussions had been “disappointing.”

Mr Tsipras said the proposed bailout would violate European rules and the rights to equality, work and dignity. He urged Greeks not to accept “an austere and humiliating austerity programme which has no end and no prospect of getting back on our feet”.

Mr Tsipras made little headway on the Greek bailout discussions at this week’s EU summit, with leaders insisting negotiations continue to take place at a technical level.

Mr Noonan said two proposals were being considered on Thursday, one from the institutions and one from Greece. He said the purpose of today’s meeting was supposed to be to continue bridging the gap between the proposals.

“Then I found at 12 o’clock last night that the Greeks had unilaterally discontinued negotiations. I’m disappointed,” he said.

There were reports of queues at cash machines in Athens following the surprise announcement of a referendum.

Some say Europe is better equipped to handle a Greek euro exit, but others say it is unclear what might happen. The euro dropped in value slightly on international markets after the referendum was called.