Greece told it may have to repay loans early 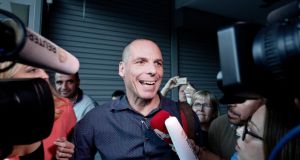 The euro zone’s rescue fund has warned Greece it could demand the repayment of bailout loans early following the country’s non-payment of an International Monetary Fund (IMF) loan instalment on Tuesday, increasing pressure on the struggling economy ahead of Sunday’s key referendum.

The EFSF fund, which lent most of the bailout loans to Greece on behalf of euro zone member states during its first and second bailouts, said Greece’s non-payment of an IMF loan instalment on Tuesday constituted a default, warning Greece it “reserves the right to act” at any time. In total, about €131 billion in loans are owed to the EFSF, a precursor to the euro zone’s current rescue fund, the European Stability Mechanism (ESM).

“This event of default is a cause for deep concern,” ESM director Klaus Regling said. “It breaks the commitment made by Greece to honour its financial obligations to all its creditors, and it opens the door to severe consequences for the Greek economy and the Greek people. The EFSF will closely co-ordinate with the euro-area member states, the European Commission, and the IMF on its future actions.”

The announcement by the EFSF is the first official response from the IMF’s institutional partners in the Greek bailout to the failure by Greece to pay €1.54 billion due to the IMF on Tuesday. The European Central Bank took no immediate action during its teleconference on Wednesday, but is due to consider on Monday the level of emergency funding it is providing to Greek banks.

Yesterday, the head of the Greek bank association warned that Greek banks had a “liquidity cushion” of just €1 billion until Monday, after which they will depend on the European Central Bank for funding.

Pointing out that Greece faced a difficult future, regardless of the outcome of the referendum, he said that difficult fiscal measures were unavoidable. “Any politician who says that wouldn’t be necessary in the case of a No vote is making a fool of his people,” he said.

His comments echoed those of European Commission president Jean-Claude Juncker, who denied that talks were under way between the Greek government and EU lenders on a bailout deal.

Speaking in Luxembourg at the opening of Luxembourg’s six-month EU presidency, he denied negotiations were ongoing.

Earlier, Mr Varoufakis said behind-the-scenes negotiations were continuing despite public pronouncements from European leaders that no negotiations would take place until after Sunday’s vote. He accused lenders of “playing hardball, of blackmailing our government with bank closures”.

Meanwhile, Valdis Dombrovskis, European Commission vice-president with responsibility for the euro, criticised the referendum question being put to voters, describing it as “neither factually nor legally correct”.

“The proposals of the European Commission, European Central Bank and International Monetary Fund, which are to be voted on are based on a now-expired credit programme,” he said in an article in Die Welt.

He also reiterated Mr Juncker’s comments that a No vote would increase Greece’s chance of securing a better deal. “It would be wrong to assume that a No would strengthen the Greek negotiating position. The opposite is the case,” he wrote.