Greece to restore power to homes cut off over unpaid bills 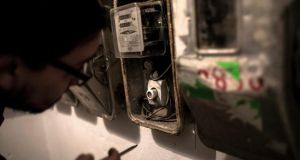 John Karampetian, an electrician, adjusts an electricity meter while attempting to reconnect power to a private apartment in a housing block in Thessaloniki, Greece. Photograph: Konstantinos Tsakalidis/Bloomberg.

Greek authorities promised today to restore electricity to households cut off for failing to pay their bills, after at least three people died in accidents caused by braziers or candles.

“We are putting people above PPC’s costs,” Mr Maniatis said, adding that electricity prices for soup kitchens and other social services would be cut by up to 70 per cent.

At least three people, including a 13-year-old and an 85-year-old, have been killed in their homes over the past week, by breathing carbon monoxide from brazier fumes or being burned alive in fires caused by candles or fireplaces, according to the fire brigade.

PPC has no official estimates of the number of households that have had their power cut off since the country’s recession started six years ago. Greek power bills include several extra levies such as an unpopular property tax.

Greece’s opposition was quick to denounce the deaths as a direct result of austerity policies imposed on Greece as part of its international bailout.

“Just a few days before Christmas and with temperatures dropping below zero in may parts of the country, it’s a shame to have families without power,” said Vassilis Kapernaros, a lawmaker of the anti-bailout Independent Greeks party.

Greece’s parliament is expected to vote late on Saturday on the country’s 2014 budget, which envisages further spending cuts to help the country meet its fiscal targets.