Greece demands urgent EU action on migrants ahead of summit

Aerial views of a migrant camp on the Greece-Macedonia border, filmed with a drone, reveals the difficult conditions its inhabitants face and how the camp continues to spread. Video: Reuters 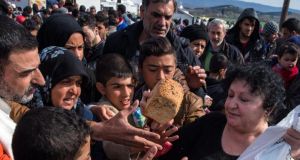 Residents of Idomeni refugee camp. If people’s hopes are finally crushed the reaction here could be violent. Photograph: Georgi Licovski/EPA

Vans selling fruit, snacks and sim cards do a brisk trade, barbers trim hair and beards, and women neatly arrange their families’ shoes outside their tents, having hung the washing out to dry on the razor-wire fence that keeps them here.

The makeshift refugee camp on the Greece-Macedonia border now has the form and feel of a semi-permanent settlement, even as its unhappy and ever-growing population hopes EU leaders will devise an escape plan for them today.

Refugees and migrants are now a constant presence on the roads and in the fields around the Greek village of Idomeni, where more than 13,000 people wait to cross the tightly guarded border into Macedonia.

“We don’t know what they will decide to do with us,” said Mahmoud (60) an engineer from Homs in Syria, who has been stuck at Idomeni for more than a week.

“We’re not expecting miracles. I expect them to try and send us back to the Greek islands or to Turkey, ” he said, ahead of today’s summit between EU and Turkish leaders that is seen as vital to preventing a crisis becoming a disaster.

With about 2,000 refugees and migrants continuing to land daily from Turkey on Greek islands, officials from Greece, the EU and aid agencies warn of a possible humanitarian disaster unless major steps are taken now.

“It’s a huge humanitarian crisis. I have asked the government to declare the area in a state of emergency,” said Apostolos Tzitzikostas, governor of the region to which Idomeni belongs, during a visit to the camp.

“There are 13,000 people here and nearly 20,000 in this prefecture, over 60 per cent of the country’s entire refugee and migrant flow. We can no longer shoulder this strain by ourselves.”

More than 30,000 refugees and migrants are now in Greece, and EU migration commissioner Dimitris Avramopoulos has warned that 100,000 more could reach the country this month.

Greek prime minister Alexis Tsipras said yesterday that with Balkan borders closed but arrivals to Greece from Turkey continuing, “it must be perfectly clear that the immediate start of a reliable process of relocation of refugees from our country to other countries of the European Union is a matter of complete urgency”.

“And this is exactly what we will seek in the summit on Monday. Not just the wording that this is urgent, but that it will begin immediately and with a large number.”

“Greece should have created 50,000 accommodation places for refugees by the end of 2015,” she said.

“This delay must be addressed as soon as possible, as the Greek government must provide decent lodgings” for asylum seekers.

With numbers at Idomeni constantly growing and weather warming up, toilet and shower facilities are struggling to cope, people queue for hours for basic food supplies from aid groups and volunteers, and fears of disease are on the rise.

Fatigue, hunger and uncertainty over the future are also feeding frustration and anger, which occasionally explodes into scuffles and, one week ago, triggered a brief riot that Macedonia’s border police subdued with volleys of tear gas.

Many people at Idomeni – most of whom are Syrian and Iraqi – follow the news on smartphones via the camp’s overloaded wi-fi system, and they are well aware of the significance of today’s Brussels summit.

If leaders fail to agree a plan that delivers swift results at Idomeni, or produce one that finally crushes these people’s fading hopes of continuing to western Europe, then the reaction here could be violent.

“Why does no one give us any information? The United Nations should do more to take care of things and organise the flow of people through the border,” said Aiham (48) from Damascus in Syria.

Many people, the men explained, just gave the year of their birth to Greek officials, who as a matter of course wrote their birthday as January 1st.

Now, Macedonian border guards were rejecting such papers because they did not tally with refugees’ passport details, and they refused to accept other Greek registration documents due to suspect stamps or signatures in the wrong colour ink.

People now queue for hours at Idomeni to fix such issues, further fuelling tension in the camp, as did reports that Macedonia was now turning back people from certain Syrian and Iraqi cities it had unofficially deemed to be “safe”, including the capitals, Damascus and Baghdad.

“We have papers that say we arrived at Idomeni on February 27th, but those who are due to cross the border today – but might not be allowed across – arrived on February 17th or 18th. We could be stuck here for weeks.”

Babar Baloch, spokesman for the UN refugee agency, called for an end to “ad hoc” rules from Balkan states and “real solidarity from EU countries to help Greece and these desperate people.”