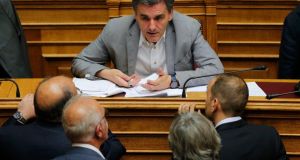 A number of Irish political parties, groupings and politicians have aligned themselves to Syriza and its enigmatic leader Alexis Tsipras in the last few years.

How will the agreement reached early on Monday - with all the compromises it entails - play out with them?

And what does it mean for the wider European left movement typified by Syriza and Podeomos?

The agreement represents a big political set-back for Sinn Féin. There is no way of glossing it over.

The party has not so much aligned as chained itself to Syriza in the past year. Alexis Tsipras was feted by the party in Dublin. Pictures of Tsipras and party leader Gerry Adams together in Dublin were widely distributed.

The influential party strategist Eoin Ó Broin did an interview for An Phoblacht Republican News that could have come straight out a fanzine. Syriza’s new finance minster Euclid Tsakalotos was the special guest at the Sinn Féin Ard Fheis in the Spring.

The Greek flag appeared at many Sinn Féin public events. And the party’s current star performer, finance spokesman Pearse Doherty, travelled to Athens for the referendum.

A lot of political commentators were surprised at the move. Sinn Féin is by far and away the most strategic party in Irish politics - if one of its politicians wants to go for a lunchtime walk around St Stephen’s Green, a party strategist can draw up a plan for it.

Other left-wing parties don’t believe Sinn Féin is a true party of the left. That said it is definitely left-leaning and has led the anti-austerity charge in Ireland.

But when you parse its policies and its ideological positioning, there was never a neat fit with Syriza.

Sure the Greek party is more of a broad movement but at its core are Marxists, and hard-core ones at that.

On the spectrum, Sinn Féin is somewhere between socialist and social democrat.

The party has always tended to align itself to movements abroad that share similarities with its own aspirations. But this was something more than that. It hitched its wagon to Syriza and Podemos.

Perhaps the lure of the rhetoric about a broad and populist movement that would sweep Europe got to it.

The third attraction has to do with bailout and with bondholders. Gerry Adams has made the argument that successive Irish governments capitulated in the face of European intransigence.

He famously said that Sinn Féin in government would tell the Troika to go and “take a hike”. Earlier this year, in an interview with The Irish Times, he argued Sinn Féin’s experience as negotiators - especially for holding out and not being afraid of all-nighters - would have yielded a better deal for Ireland.

In fairness, he did not say that the party would get all its own way but that it could wring significant concessions.

In that regard, if Syriza had succeeded, or had walked, Sinn Féin would have been quick to capitalise on it and point the finger at successive governments for their failure.

But none of that has come to pass.

As the Belfast-based political scientist Dr David McCann (@dmcbfs) tweeted this morning: “Never link yourself to an outcome you cannot control”.

So where does it leave Sinn Féin? Well, the party is going to take a hit. Its early public responses have attacked the Government for its obduracy and showing no sympathy to the plight of the Greeks. But that’s not going to have much purchase politically.

If the party continues to back Syriza it will be acknowledging - to all intents and purposes - that it in power could have done little to alter the course of history over the past few years.

If it backs away from Syriza it will be accused of back-peddling and of being Tadhg an Dá Thaobh (Tadhg of the two sides).

Either way, there is not much upside.

Paul Murphy decoupled himself from Syriza as soon as the party asked the Greek parliament to accept a package including a lot of austerity.

Murphy has built up lots of air miles over the past years with his frequent visits of solidarity to Athens and was among the strongest supporters of Syriza among Irish politicians.

But is has now all gone sour. Murphy has taken a pasting on social media for being a ‘sunny day’ supporter and for ditching Syriza.

But has argued that his solidarity is with the Greek people and with those who oppose austerity. By succumbing to the austerity agenda, he has argued, Syriza has abandoned him and other anti-austerity campaigners rather than the other way around.

Murphy and his SP/AAA colleagues are ideologically hard-core left and make no bones about it. The only way that he could have supported Syriza was if the party had wholly rejected the deal and exited the euro, brought in State ownership of the banks, and raised capital and finance by some other means (not fully explained as yet).

In terms of how that would manifest itself politically, it is revolution, nothing short.

In fairness to Murphy, it is a consistent stance and it was always improbable that his party would back any package that contained any element of austerity.

The reality is that the inflexibility of the stance will mean that Murphy and his colleagues will remain either on the fringes, or as outsiders, in Irish politics (in other words, they will never agree to become part of a coalition). Or else, they will only come to power if the current system collapses.

Yes, it is an unlikely alliance, but the Dublin Rathdown Independent TD has been a big and consistent supporter of Syriza since backing them before the election.

Ross is hardly a socialist (most commentators view him as a chameleon with no set views) but he is a maverick and a contrarian.

The anti-authoritarian nature of Syriza would have been attractive to him, giving the EU and its elites a body nose.

He is also a punter but he has called this one wrong.

At the end of last month he tweeted: “Noonan and Kenny terrified of being exposed if Greek people get better deal than Irish. They will.”

Or on that same day: “Time we speed it out. Greece cannot repay debts. Debt write down will come to Athens. Ireland will look lame having rolled over to the Troika.”

How wrong was that? What impact will it have on the mercurial and polished Ross? None whatsoever. Water of a duck’s back. He will still coast home in next year’s general election even though very few of his constituents will share his idiosyncratic (for him!) views on Greece.

Unlike the other left-wing party the AAA, People Before Profit decided early on it was not going to be an uncritical supporter of Syriza. Richard Boyd-Barrett struck a note of caution in January when Tspiras demonstrated the political pragmatism (which will now be his hallmark) by agreeing to a coalition with the small right-wing party, the Independent Greeks (its leader became defence minister).

Boyd-Barrett has expressed support for the anti-austerity movement in Greece but the public pronouncements have always been more muted and qualified than those of Murphy.

Indeed, in recent months, PBP has focused much of its energies on domestic issues such as water charges and property charges. Therefore, the outcome of the negotiations will have less impact for PBP.

1 Eating out in Dublin – the homeless way
2 Which jobs do teenage girls and boys aspire to have by age 30?
3 Independent TD Tommy Broughan announces retirement from Dáil
4 Election 2020: Peter Casey to stand in both Donegal and Dublin West
5 Irish Times poll: Large majority want change of government
Real news has value SUBSCRIBE