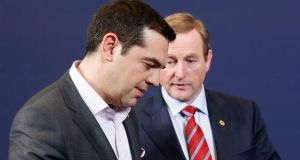 The country is facing a potential cash crunch within weeks. While Greek prime minister Alexis Tsipras held talks with a select group of EU leaders on the margins of the European summit last night, there was little hope of a political breakthrough, with leaders insisting Greece must continue technical negotiations with its lenders.

Taoiseach Enda Kenny was among the most vocal critics of the Syriza-led government yesterday. “People are very encouraged to give Greece support and to give it its time and space to come forward with sustainable solutions, but there’s a difference between political argument and disagreement and threats of releasing jihadists and terrorists in Europe. That’s not acceptable.”

Speaking on his way into the summit, Mr Kenny said the issue had been discussed during a pre-summit meeting of EU leaders from the centre-right EPP group. “There was quite a deal of comment at the EPP meeting from some members about the strength of language used by our Greek colleagues,” Mr Kenny said, adding that “time is running out” for Greece. “The feeling among the political leaders is that Greece and the Greek politicians have got to face up to their political responsibilities here. The ball is in their court.

“The prime minister asked for time and space and he has been given that to come forward with sustainable and workable proposals, and obviously Greece needs to reflect on that now as time is running out.”

Frustration is growing at EU level over the Greek government’s apparent failure to propose specific reform measures since a temporary bailout extension was agreed on February 20th. On Wednesday the Greek government passed a controversial “anti-poverty” Bill in defiance of a European Commission request that the measure be reconsidered.

Greek bond yields continued to rise yesterday, with yields on 10-year bonds rising to close to 12 per cent, the highest level in almost two years. Officials from the three creditor institutions negotiating with the Greek government about the terms of its bailout have reported difficulties in accessing precise information about the state of the Greek public finances.

Greece faces a number of debt repayments in the coming weeks, as well as its regular commitment to pay public sector salaries and pensions.

The focus is now likely to turn to the Greek prime minister’s visit to Berlin on Monday – his first since assuming power in January.