Troubadour of love, tenderness and anti-racism gave France some of its best-loved music 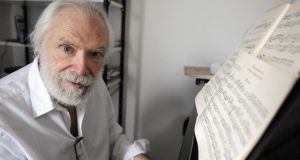 Franco-Greek singer and songwriter Georges Moustaki plays the piano at his home in Paris in 2008. Photograph: Stephane de Sakutin/AFP/Getty

With the death of Georges Moustaki, the golden age of the French popular song nears an end. The Greek-Egyptian-Jewish singer and composer gave France some of its best-loved music. He was “an immense artist, whose popular, committed songs marked several generations of French people,” President François Hollande said.

Moustaki died on Thursday of emphysema in a hospital in Nice. He was born Giuseppe Mustacchi in Alexandria, Egypt, in 1934. His Francophone Greek Jewish parents, Nessim and Sarah, had emigrated from Corfu and owned the Cité du livre, one of the finest book shops in the Middle East.

Moustaki worked as a waiter and pianist in the night clubs of the Left Bank when he arrived in Paris at age 17. The singer Georges Brassens took him under his wing. Out of gratitude, Moustaki adopted the first name of the only musician he called “master”.


Piaf hit
For years, Moustaki lacked the confidence to sing, though he wrote for all the greats of the era. He spent a year with Edith Piaf when he was 24 and she was 47, earning him the sobriquet “the gigolo”. Moustaki wrote one of Piaf’s greatest hits, Milord .

Moustaki later went on tour with another famous French woman singer, Barbara. As he told the story, Moustaki spent hours watching television on Barbara’s sofa every day. “She threatened to get rid of the TV if I didn’t write her a song. So I did La Longue Dame Brune in one hour.”

Throughout his life, Moustaki claimed “the right to laziness”, one of his titles. He nonetheless leaves an oeuvre of some 300 songs.

The poetic ballads Moustaki wrote for Serge Reggiani – Ma Liberté , Votre Fille a vingt ans and Ma Solitude – are French classics. But Reggiani rejected Moustaki’s masterpiece, Le Métèque , and the record companies refused to produce it. In 1969, Moustaki sang it himself, on a 45rpm disc, and became famous.


Hymn of anti-racism
Moustaki had turned the derogatory word for a shifty-looking immigrant of Mediterranean origin into a badge of honour and a love song. “A small, subliminal settling of scores became the hymn of anti-racism and the right to be different, the cry of revolt of all minorities,” he said.

His beard and long hair, his message of non-violence and sexual freedom, exemplified the “baba-cool” style that emerged from the events of May 68. He sang in occupied factories during the May “revolution”, and endorsed an anti-capitalist candidate in the last French presidential election. But he didn’t take politics too seriously, joking that Nicolas Sarkozy’s policies had benefited him as a rich man.

Moustaki’s political songs could be as tender and quixotic as his love songs: “I declare the state of permanent happiness/And the right of everyone to all privileges/I say that suffering is a sacrilege/when there are roses and white bread for all.”

An eternal dilettante, he wrote, painted, played chess and ping-pong. He greeted success and misfortune with equanimity, downgrading from a Jaguar to a Renault 4L when times were hard.

Moustaki performed on every continent, but always returned to his duplex apartment in the rue des Deux-Ponts on the Île Saint-Louis. Its residents, shopkeepers and restaurant-owners now mourn him.