Germany urges Pakistan and others to take back asylum seekers 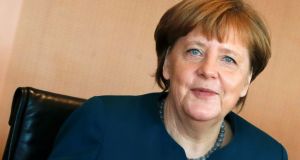 Germany has sent angry letters to Pakistan as well as north and west African countries, accusing them of refusing to take back failed asylum applicants.

And after accepting 1.1 million migrants last year, Berlin’s efforts to reduce the numbers arriving this year have come under fire from Amnesty International.

With chancellor Angela Merkel under growing domestic pressure to drive down asylum seeker numbers, German officials are determined to deport about 200,000 people whose asylum applications were rejected last year. But so far only 21,000 people have left, leaving 179,000 people with “tolerated” status in the country.

In letters to Islamabad and capitals across Africa, German authorities have demanded greater co-operation in offloading their nationals.

Just two people were repatriated to Pakistan in 2014 despite the rejection of 580 asylum applications from people from that country. The year before just three out of 533 returned.

Countries in receipt of angry letters from Berlin of late, according to Die Welt daily, include Benin, Senegal, Guinea-Bissau, Niger, Nigeria and Sudan.

Similar problems exist with countries in northern African, which is to be visited later this week by Germany’s federal interior minister Thomas de Maizière.

Berlin has promised a “new phase” of relations with “positive effects” on bilateral relations should countries step up efforts to take back their citizens.

On Wednesday a plane load of 125 Afghans were flown back from Germany to their native country after Mr de Maizière said the returnees had “no prospects to stay in Germany” but would be given assistance on return.

“The voluntary return and – if needed – financial support is of great importance,” he said. “It contributes to the important task of rebuilding Afghanistan. ”

Presenting its annual report yesterday Amnesty International had a mixed review for Berlin’s approach to the migration crisis. Amnesty Germany head Selmin Caliskan praised the “welcome culture” of last summer’s stance, and chancellor Angela Merkel’s pragmatic “we can do this” policy. But Dr Merkel was no longer the same politician of last summer, said Ms Caliskan, and her government’s recent asylum reform packages represented a slow “undermining” of human rights.

Amnesty was critical of proposals to limit family unifications and to reclassify Morocco, Tunisia and Algeria as “safe countries of origin” – making asylum far less likely.

“Another normality is being created – and that is dangerous, because you can only have prosperity and security if human rights are respected,” said Ms Caliskan. “The [German] government is losing sight of human rights.”