A convoy of cars reaches Budapest to pick up migrants and take them to the Austrian-Hungary border. Video: Reuters 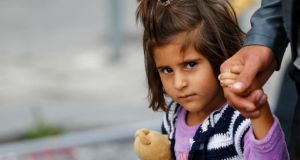 A migrant child walks after arriving by train to the main railway station in Munich, Germany on Sunday. Austria and Germany threw open their borders to thousands of exhausted migrants on Saturday, bussed to the Hungarian border by a government that tried to stop them but was overwhelmed. Photograph: Reuters/Michael Dalder

The German government will spend an extra €6 billion to cope with this year’s record influx of refugees, the ruling coalition said on Monday.

State and local governments will receive €3 billion to help them house the 800,000 refugees heading for Germany while the central government is planning to free up another €3 billion to fund its own expenses, such as paying benefits for asylum seekers.

After a meeting in Berlin lasting more than five hours, leaders from chancellor Angela Merkel’s governing coalition also agreed on a series of other measures, such as speeding up asylum procedures and facilitating the construction of asylum shelters.

Germany expects to take in by far the most refugees of any nation in the European Union. In August alone, more than 100,000 asylum seekers were registered in Europe’s largest economy.

It came as the United Nations warned that its humanitarian agencies were on the verge of bankruptcy and unable to meet the basic needs of millions of people because of the size of the refugee crisis in the Middle East, Africa and Europe.

“We are broke,” the UN high commissioner for refugees, António Guterres, said.

Germany’s coalition agreement included widening the list of countries deemed “safe”, meaning their citizens generally have no claim to asylum, to include Kosovo, Albania and Montenegro. Among those already in that category are Serbia, Macedonia and Bosnia.

The aim is to speed up asylum and extradition procedures for migrants from southeastern Europe, in order to focus on refugees from war-torn countries such as Syria, Iraq and Afghanistan.

The coalition meeting came at the end of a weekend that saw 18,000 refugees entering the country after Germany and Austria had agreed with Hungary to waive rules requiring refugees to register an asylum claim in the first EU country they reach.

The president of the Upper Bavarian government, Christoph Hillenbrand, said he expected 13,000 migrants to reach Munich on Sunday, up from a previous estimate of 11,000, following 6,800 arrivals on Saturday.

Mr Hillenbrand said another 11,000 could arrive on Monday, adding that Munich was running out of capacity.

Authorities there were using a disused car showroom and a railway logistics centre as makeshift camps, and were adding a further 1,000 beds to 2,300 already set up at the city’s international trade fair ground. About 4,000 people were sent to other German states.

Ms Merkel’s decision to allow thousands of refugees stranded in Hungary to find a new home in Germany has caused a rift within her conservative bloc. Her allies in Bavaria accused her of sending a “totally wrong signal”.

Austria warned on Sunday that it would close its border again, preventing Middle Eastern and African migrants travelling through to Germany and threatening another build-up of people in neighbouring Hungary.

“We have always said this is an emergency situation in which we must act quickly and humanely,” Reuters quoted Austrian chancellor, Werner Faymann, saying.

“Now we have to move step by step away from emergency measures toward normality in conformity with the law and dignity.”