Germany to add US and Britain to list of surveillance targets 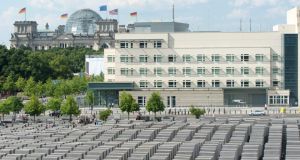 A view of the US embassy with the US flag showing the German Reichstag building in the background and the Holocaust memorial in the foreground in Berlin. Photograph: EPA

Germany’s intelligence services have been instructed to add the US embassy in Berlin to its list of surveillance targets in retaliation for US spying on the German government and communication.

Berlin’s new “360-degree strategy” will see Germany’s BfV domestic intelligence agency monitor all intelligence activity on German soil, even involving agents based in the embassies of friendly nations, such as Britain and the US.

Until now Berlin said it did not spy on such partners, and expressed public annoyance after revelations that this was not mutual practice.

Earlier this month, investigators arrested and questioned an employee of the foreign intelligence service, BND, who said he sold classified information to the CIA over a two-year period.

A week later police questioned and searched the home of a second suspected double agent at the defence ministry, but did not arrest him.

In response, Berlin told the CIA station chief at the US embassy to leave the country before he was thrown out. The leading intelligence official left a week ago.

After a phone call between US president Barack Obama and German chancellor Angela Merkel, the latter’s spokesman said differing opinions on the role of intelligence services “could not be solved in a phone call”. Dr Merkel has said it is “not on” to spy on allies and, earlier this month, called the practice a “waste of energy”.

The “360-degree view” plan was already developed after last year’s revelations by NSA whistleblower Edward Snowden that the NSA used a listening post on the roof of the US embassy to monitor Berlin mobile telecommunications, including Dr Merkel’s mobile phone.

“We need a strong signal,” an unnamed official, reportedly involved in the plan, told the Süddeutsche Zeitung.

Though precise details of their scope have yet to be decided, the source said the measures were “strictly defensive” and would be used only in a domestic context. They will be co-ordinated by the BfV domestic intelligence agency, based in Cologne with 2,800 staff members.

German officials said the BND would not commence spying on US government or agencies on American soil.

According to German sources, Mr McDonough said Germany’s annoyance had been registered in Washington, as had its concern at the potential damage of the revelations to bilateral relations and the image of the US in Germany. In addition, the talks were said to have focused on new rules of engagement for intelligence services.

Until now, domestic German intelligence surveillance of foreign governments focused on the Russians, Chinese and Iranians.