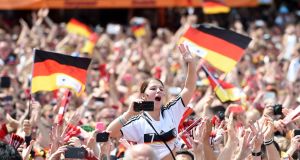 Did you know that 71 per cent of German pedestrians don’t wait for the green man to cross the road? Or that 82 per cent like to cuddle?

It’s amazing what you can find out from German surveys. And as Germany celebrates a quarter century as a united country tomorrow, there’s no shortage of surveys doing the rounds about “the Germans” we keep hearing about.

The fall of the Berlin Wall on November 9th, 1989 was the emotional end of German division, but the legal end came on October 3rd, 1990, after a remarkable year of diplomacy and realpolitik.

That night in Berlin, as fireworks lit up the sky over the Reichstag, marked the final act of German division that began on paper in 1949 and was reinforced with a concrete wall in 1961.

After 25 years living alongside each other in one country, differences still linger between former East and West Germans. But the differences are increasingly regional differences or lingering perceptions of older generations.

A quarter century after the birth of the modern Federal Republic, it’s fair to say that the vast majority of Germans are more interested in what unites them than what divides them.

The most heartening news is that about 82 per cent of Germans, east and west, are satisfied with their post-unification lives, according to a Forsa survey for this week’s Stern magazine. Even more striking, given Germany’s troubled history, some 80 per cent agree that they can be proud of their Germany.

More interesting than the annual unification navel-gazing is How We Germans Tick, a bumper book of surveys conducted by YouGov.

This is where I found out that only 29 per cent of Germans actually wait for the green man. If you love your German stereotypes, stop reading now.

Asked to choose between wine and beer, a majority, 57 per cent, actually prefer wine. And while two-thirds of Germans agree that their countrymen are punctual, just 45 per cent think “loving order” is a typical national characteristic.

The most amusing survey questions demonstrate how, if they think no one is watching, even Germans know how to bend the rules.

For instance: you’re a German motorist waiting in your car at a red light that refuses to go green. How long do you wait before breaking the lights?

How We Germans Tick gives disturbing insights into just how far people here will let themselves go. In a survey question that only Germans would ask, a third admitted to peeing in the sea, lake or the shower while 14 per cent sometimes even pee in the swimming pool.

And while we’re on the subject of German fascination with bodily functions, and our fascination with their fascination, have you ever heard of the number of German men who sit down to urinate at home? An extraordinary 67 per cent. This truly is the land of gleaming toilet bowls.

If you’ve visited Germany, you may have noticed it is also the country of the disapproving, staring stranger. If you wonder why they’re staring, there’s usually no reason; they just are.

Talking loudly on your mobile phone in a public place annoys 86 per cent of Germans while just half that – 44 per cent – have a problem should you start picking your nose.

The bumper survey book shows that the shadows of Germany’s Nazi past are shortening, but haven’t vanished. Three-quarters of Germans still believe that the Nazi past will continue to play a role internationally for some time to come, while in another survey, 73 per cent want a line drawn under the past.

Given Nazi excesses in the last century, national pride is still a tricky business, with sporting success still a safe proxy: 71 per cent say they were “proud and moved” when Germany won the World Cup last year.

But there is a tension building in modern Germany: almost two-thirds say they “would find it great if it was possible to be a patriot in Germany without being attacked as a nationalist” while just over a third still say they are “sometimes ashamed to be German”.

When the flag is raised tomorrow on a quarter century of modern Germany, the book suggests some 56 per cent will be moved, meaning 44 per cent will not. So while Germany is still a country divided in that respect, the modern federal republic has grown together – and grown up.