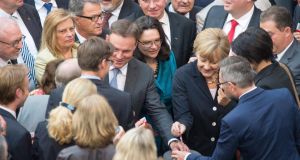 Germany’s lower house of parliament approved the introduction of a nationwide minimum wage of €8.50 an hour yesterday, following months of heated debate among politicians and businesses who warned it would cost jobs.

The law is a flagship reform of the centre-left Social Democrats (SPD), who made it a condition for entering a “grand coalition” with German chancellor Angela Merkel’s conservatives last year.

The SPD has argued that a formal minimum wage is necessary to stem a yawning social divide between those in full-time jobs with full benefits and those in informal arrangements that was spawned in part by the reforms of Dr Merkel’s predecessor, SPD chancellor Gerhard Schröder.

“Hard-working, cheap and unprotected – that has been the reality for millions of employees in Germany. That’s over now,” SPD labour minister Andrea Nahles, who oversaw the drafting of the law, said in a speech in the Bundestag before the vote.

Opponents say the wage could threaten jobs at small firms, particularly those in the former East where wages are lower, and hurt the competitiveness of Europe’s largest economy.

Hartmut Mertens, chief economist at Investitionsbank Berlin, said the minimum wage “will make it even more difficult for people without qualifications to find a job”, while Mario Ohoven, head of a Mittelstand lobby, said the reform could become a “jobkiller by law” unless it is adjusted.

Speaking to conservative business leaders and politicians after the vote, Dr Merkel described the minimum wage and a pension reform that allows some people to retire at 63 instead of 67 as two “painful compromises” with the SPD. “For German industry, the minimum salary is not a central issue but for the service industry it is different and for the eastern German states as well,” she said.

Unlike most EU countries, Germany has resisted a minimum wage partly because it is seen as political interference in wage bargaining between unions and employers. It has relied on collective wage deals by sector and region.

Germany has been one of seven in the 28-nation EU without a minimum wage. Britain raised its minimum wage earlier this year to £6.50 (€8.19) an hour to adjust for the drop in real value during the recession. Swiss voters rejected a proposal to introduce the world’s highest minimum wage – 22 Swiss francs (€18.10) an hour – in May.

Despite the arguments that split the establishment, the public was overwhelmingly behind the idea of a minimum wage. A poll this week showed nine out of 10 Germans were in favour of it.– (Reuters)