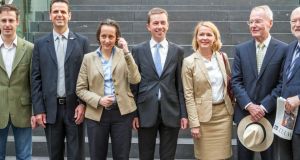 With David Cameron in Sweden to haggle with other European Union leaders over Jean-Claude Juncker’s fate, his Tory MEPs face another difficult choice in Brussels.

After final talks today, they decide tomorrow whether or not to accept Germany’s Alternative für Deutschland (AfD) as Euro-critical allies in the new European parliament.

Welcoming the seven German MEPs would be a shot in the arm to the Tory’s European Conservatives and Reformists (ECR) grouping, making it the third largest in the new parliament and giving a strong voice to the Tory Eurocritical reform agenda.

But they also know that opening the door to the AfD, which polled 7 per cent on May 25th in Germany, would unleash the wrath of Angela Merkel.

With the AfD rising in the polls, the German leader is facing growing pressure from inside her party to present a clear political strategy to challenge – rather than ignore – the AfD threat.

Aware of Dr Merkel’s problems, AfD MEPs are in wooing mode with their Tory colleagues in Brussels, pointing to their political common ground: opposition to further integration and a low view of the single currency.

“It can’t be in the Tories’ interest to weaken their voice in Europe and their reputation by being seeing as Merkel’s lapdog, which is what agreeing to keep us out of the ECR would look like,” said a senior German AfD member yesterday to The Irish Times. “If they don’t let us in, it would only boost Ukip – both in the European parliament and at home.”

While AfD officials say their Tory counterparts are open-minded to a collaboration, they also know that Downing Street is sympathetic to Dr Merkel’s concerns.

Welcoming the AfD now could be counterproductive as London works to secure German support to block Juncker as next European Commission president.

Beyond the Juncker question, Cameron is anxious to keep Berlin onside, to set in motion the EU reform agenda he needs ahead of Britain’s proposed in-or-out referendum on EU membership.

Just as crucial to humouring Berlin, however, is having a strong European parliament presence.

That is where the seven AfD MEPs could be useful, in particular in helping the Tories keep the upper hand in their European Conservatives and Reformists grouping over Poland’s Law and Justice (PiS) party. The national conservative party of Jaroslaw Kaczynski topped the poll at home and, just one seat behind the Tories, is pushing for more say in ECR parliamentary affairs.