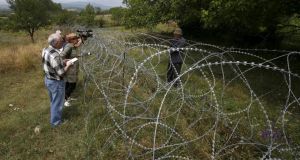 Russian troops have been installing barbed wire and fences around South Ossetia since the war but residents say the soldiers have now erected border signs up to about 1.5 km beyond the administrative border. Photograph: David Mdzinarishvili/Reuters

Georgia accused Russia on Monday of violating its sovereignty by placing border markers on the edge of the South Ossetia region, leaving part of an international oil pipeline in territory under Russian control.

Tbilisi has not controlled South Ossetia or its fellow breakaway region of Abkhazia since fighting a brief war with Moscow in 2008. Both host Russian military bases, but most countries and the United Nations regard them as part of Georgia.

Russian troops have been installing barbed wire and fences around South Ossetia since the war but residents say the soldiers have now erected border signs up to about 1.5 km beyond the administrative border.

Condemning the action, Georgia’s Foreign Ministry said part of the BP -operated Baku-Supsa oil pipeline was now in territory it regards as occupied by Russia.

“The Georgian Foreign Ministry expresses its extreme concern over the illegal placement of banners by the Russian occupying forces marking the so-called ‘border’,” it said in a statement.

“It is noteworthy that ... with this illegal action a certain portion of the (Baku-Supsa) pipeline next to the village of Orchosani fell within the occupied territory.”

Russia did not immediately comment on the ministry’s remarks.

The 830-km Baku-Supsa pipeline runs from Azerbaijan to the Georgian Black Sea terminal of Supsa and has the capacity to transport up to 100,000 barrels of oil per day.

“As the operator of the Baku-Supsa oil pipeline, BP has been delivering Azerbaijan’s oil in a reliable, efficient and secure way to the world market for over 15 years, and will continue to do so in the future,” Azeri news agency ANS quoted Tamam Bayatly, BP-Azerbaijan spokeswoman, as saying.

Zurab Abashidze, a special envoy for relations with Russia, called it a “deliberate provocation, a very dangerous provocation” in a region where “security and peace hang by a thread”.

Georgia is strategically important for Europe because of the pipelines that run through the country of 3.7 million, bringing it Caspian gas and oil.

The former Soviet republic is seeking membership of the NATO military alliance and the European Union. It has no diplomatic relations with Russia but says a foreign policy goal is not to antagonise Moscow.

Irish in Peru: ‘There are people still stuck here and they need not to forget about us’ 08:25
Coronavirus: New York appeals for reinforcements as Asia warned to stay alert 08:12
Coronavirus: UK fatalities rise to 1,408 with worst thought yet to come 22:51
Covid-19: Spain now third country with more infections than China 21:43
Coronavirus: New Yorkers cheer arrival of hospital ship as cases soar 21:28