French National Front leader calls for the ‘explosion’ of Europe

Right-wing eurosceptics will do utmost to block next parliament, claims Marine Le Pen 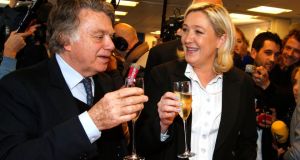 Marine Le Pen and National Front deputy Gilbert Collard hold glasses with champagne surrounded by journalists as they attend the presentation of New Year wishes to the media in Nanterre on Tuesday. Photograph: Benoit Tessier/Reuters

Marine Le Pen doesn’t want to reform Europe. It is, she says, “unreformable”. She wants to blow it up. Knock it down. Start over with “a space of co-operation between nations that have regained their sovereignty”.

Le Pen has been a member of the European Parliament since 2004. Three years ago, she took over the National Front (FN) party that her father Jean-Marie founded in 1972. Opinion polls show the FN in the lead for the May European elections, with 24 per cent of the vote.

In a meeting with the Anglo-American Press Association at her party’s headquarters in the suburb of Nanterre, Le Pen says she is tripling her party’s participation in the March municipal elections, to 500 towns and cities. In May, she predicts, “the eurosceptics will make massive gains in the European parliament. I want only one thing of the European system: for it to explode. I want it to explode,” Le Pen continues.

She calls the EU “the Soviet Union of Europe”, then asks and answers her own question: “How do you improve the EU? By precipitating its collapse. We knocked down the Berlin wall; we have to knock down the wall of Brussels.”


Rejection of Europe
The FN is in contact with like-minded parties in Austria, Belgium, Holland, Italy and Sweden, Le Pen said. Rejection of Europe is the tie that binds them. “We don’t hide it anymore; well, we never hid it, but some of them said, ‘Our Europe, a different Europe . . .’ We consider that the EU hurts our countries in every way: our economies, security, immigration.”

This “embryo” of a parliamentary group will come together immediately after the election, Le Pen said. “Our role will be to block any advance of the federal European Union. We will do our utmost to block it, through any means.”

Immigration, Le Pen says, “will be the problem of the 21st century, for practical reasons, because of the massive increase of the world’s population, because of diminishing resources, particularly food”.

The EU’s commitment to secure borders in exchange for freedom of movement within the union was “a big joke”, she says. “The EU has never secured a single kilometre of a border. Our borders are open to the winds.”

One of Le Pen's European friends, the Dutch politician Geert Wilders, is so rabidly anti-Muslim that the UK Independence Party has ruled out any association with him. Wilders recently printed up green bumper stickers designed to look like the Saudi flag, with a text in Arabic saying, “Islam is a lie. Mohammad is a crook. The Koran is poison.”


Neo-Nazi
Le Pen wants nothing to do with the Hungarian party Jobbik nor the Greek Golden Dawn, which are considered neo-Nazi. Perhaps the biggest difference between Marine and her father is that she never flirts with anti-Semitism or Holocaust negation. She admits to “differences” with Wilders. “He has a more radical vision of Islam. He thinks it is irreconcilable with secularism.” French Muslims were fine, Le Pen says, until fundamentalist salafists began reversing assimilation. “In the immigrant banlieues, they say, ‘We haven’t seen you in the mosque’, or ‘You were in the restaurant during Ramadan’, or ‘Why doesn’t your wife wear the headscarf?’”

Le Pen criticises Nicolas Sarkozy and François Hollande for strengthening relations with Saudi Arabia and Qatar, whose royal families, she says, “support international terrorism”. She is especially critical of Sarkozy’s intervention in Libya, which precipitated the fall of Muammar Gadafy.

“After 9/11, we all agreed to fight terrorism,” Le Pen recalls. “Then we armed Islamists who declared Sharia the day they came to power in Libya. Now we’re fighting Islamists in Mali who’re using the weapons we sent to Libya. Are we crazy? The fall of Bashar al-Assad in Syria would bring al-Qaeda to power. I prefer a secular authoritarian system to an Islamist authoritarian system.”

Though she insists controversial comedian Dieudonné M’Bala M’Bala “has nothing to do with the FN”, Le Pen says interior minister Manuel Valls's attempt to ban Dieudonné's show represents a “dangerous totalitarian drift” in French politics. Valls’s order was yesterday reversed by a tribunal on the grounds of free speech, but Valls appealed to the Council of State, which maintained the ban on Dieudonné’s show.