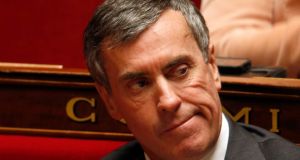 The French minister in charge of clamping down on tax evasion resigned last night after allegations that he evaded taxes with a secret Swiss bank account.

Jerome Cahuzac, the budget minister, who has vehemently and repeatedly denied the accusations, stood down hours after it was announced a legal investigation had been opened into the accusations.

The launching of legal proceedings for “fiscal fraud” did not specifically name Mr Cahuzac but centres on claims that he hid money from the French tax authorities, first in Switzerland and then in Singapore.

It followed a preliminary inquiry opened in January to determine whether a voice on a recording of an alleged conversation between Mr Cahuzac and his wealth manager in 2000 was that of the minister.

Last night Mr Cahuzac continued to insist he was innocent, and lambasted what he said were defamatory accusations. He said he had resigned for the “good of the government”.

A spokesperson for French president François Hollande said he had accepted Mr Cahuzac’s resignation and removed him from office. In a statement, he thanked Mr Cahuzac for his “talent and competence”, and said he applauded his decision to resign to “better defend his honour”.

French prime minister Jean-Marc Ayrault added that Mr Cahuzac had resigned to concentrate on his legal defence and “to not embarrass the government”. “The prime minister regrets but understands his decision,” said a statement from his office.

It is the first serious scandal to hit Mr Hollande since his election last May. The embarrassment is compounded by the fact that Mr Cahuzac (60), a former MP and cardiologist who became a hair transplant surgeon, has headed Mr Hollande’s efforts to cut France’s public deficit and stamp out tax evasion.

He had appeared to be in the clear last month after the Swiss authorities said they could find no trace of an account. However, French investigative website Mediapart, which broke the original story, insisted it had evidence.

Last night Mediapart said it had been vindicated.