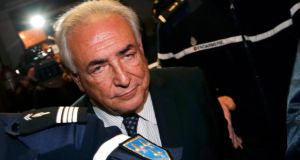 Dominique Strauss-Kahn: was not a mere participant in what he labelled “libertine acts”, but a chief organiser, the judges said. Photograph: Christian Hartmann/Reuters

Magistrates Stéphanie Ausbart and Mathieu Vignau announced their decision to send Mr Strauss-Kahn to trial for “aggravated pimping” – involving more than one prostitute – on July 26th. The document in which they explained their reasons for doing so was leaked to Le Figaro yesterday.

Contrary to claims by Mr Strauss-Kahn, the accused knew full well that the women who attended the sex parties were prostitutes, the judges wrote. Mr Strauss-Kahn said earlier he was unaware of the women’s profession “because they had their clothes off” and all looked the same.

Several prostitutes questioned by the judges said they were certain Mr Strauss-Kahn knew. “All those present could not have been unaware” that they were paid, one said. Another prostitute, identified as Jade, accused Mr Strauss-Kahn of lying, saying: “I think he takes us for complete fools.”

‘Brutality’
The “age and appearance” of the women left little doubt, witnesses said. Furthermore, Mr Strauss-Kahn treated them with a “brutality” that would have been unlikely between consenting partners.

Nafissatou Diallo, the African hotel maid whom Mr Strauss-Kahn was charged with assaulting in New York in 2011, accused him of a “violent, sadistic attack”.

Mr Strauss-Kahn allegedly communicated with other participants by text. “These evenings were not organised without him, and if they were organised, it was in function of his presence in various cities, of his agenda . . . He was in charge of programming the evenings,” the judges wrote.

The judges reproached Mr Strauss-Kahn for trying to “hide his tracks” by using coded language in his messages, and later giving his phone card to a co-defendant to “sanitise” it. He referred to the prostitutes as “girlfriends”, the “delegation of girlfriends”, “gifts” and “equipment”.

The businessmen who collaborated with Mr Strauss-Kahn in the prostitution ring believed he would succeed Nicolas Sarkozy as president of France, and that their services would be remembered with gratitude. Several witnesses said they received orders not to talk about prostitution or remuneration in front of Mr Strauss-Kahn.

The trial of Mr Strauss-Kahn and 13 others charged with him could take place as early as next year. If convicted, he risks up to 10 years in prison and a €1.5 million fine. While awaiting trial, he is required to report regularly to police.

Fourth case
This is the fourth case against Mr Strauss-Kahn for sexual assault in two years. The New York hotel maid sued Mr Strauss-Kahn but settled out of court for an undisclosed sum. Tristane Banon, a young French woman, accused Mr Strauss-Kahn of attempting to rape her in 2003, but the case had passed the statute of limitations. Last October, a Belgian woman who claimed she had been gang-raped by Mr Strauss-Kahn and others at a party dropped charges.

The sexual scandals have not prevented Mr Strauss-Kahn from pursuing his career as an economist. His consulting firm, Parnasse, is headquartered on Paris’s Boulevard Raspail.

At the end of July, he became an adviser to two state-owned Russian banks. He gave a 40-minute interview to television journalist Anastasia Popova. She introduced him as “an influential French economist” and did not mention that he faced trial for pimping.

“Didn’t you have the impression that a lot of people didn’t want you to become president of France?” she asked Mr Strauss-Kahn.

“Yes, there were a lot of them,” he replied. “But it seems to me that they were even more numerous who saw a president in me. Well, we’ll never know.”

1 Des Bishop apologises to Traveller community for comments in interview
2 One hundred Irish retailers for all your online Christmas shopping
3 A further three deaths and 1,167 new Covid-19 cases reported in the Republic
4 Varadkar says ‘dumping’ contact tracing problem on GPs ‘unfair’
5 Life under Level 5: What will the next six weeks look like for the State?
Real news has value SUBSCRIBE