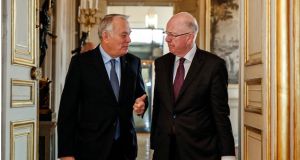 A “French initiative” to revive the Israeli-Palestinian peace process is not dead, the foreign ministers of France and Ireland said at a joint press conference at the French foreign ministry in Paris on Thursday.

Foreign minister Jean-Marc Ayrault briefed Minister for Foreign Affairs Charlie Flanagan on the French plan to convene a second international conference on the subject “before the end of the year”.

Mr Flanagan had participated in the ministerial conference organised by Mr Ayrault last June 3rd. It was attended by representatives of 26 countries and the heads of leading international organisations, without Israelis or Palestinians. The goal was to prepare for a second conference to include the protagonists.

On November 7th, the Israeli prime minister Binyamin Netanyahu refused to receive Pierre Vimont, the senior French diplomat attempting to organise the conference. Mr Netanyahu met instead with the prime minister of Fiji.

Israel claims progress can come only from direct, bilateral negotiations between Mr Netanyahu and the Palestinian president, Mahmoud Abbas.

Mr Ayrault said the conference he hopes to hold “is not going to be a repeat of the meeting we held on June 3rd”. He thanked Mr Flanagan for making contacts with Israelis and Palestinians. “His help in convincing of the need for movement is very useful,” Mr Ayrault said.

“The situation on the ground, with continuing colonisation and persistent violence and tension is demoralising the Palestinians. It is particularly dangerous,” Mr Ayrault said. “We are appealing to both sides’ sense of responsibility.”

Those who think the Israeli-Palestinian conflict is “secondary in the unstable Middle East are wrong”, Mr Ayrault said. “Every conflict must be dealt with. And this one all the more so, because it goes back so far.”

Mr Ayrault’s predecessor, Laurent Fabius, intended to float a UN Security Council resolution that would have set an 18-month deadline for completing negotiations on a “two-state solution”. If that failed, France was to have recognised Palestine.

But the US threatened to veto the resolution, and Mr Ayrault abandoned the threat to recognise Palestine.

Israeli officials are reportedly anxious that US president Barack Obama may refrain from vetoing a security council resolution condemning the building of Israeli settlements on Palestinian land in the West Bank, before he leaves office on January 20th.

In an opinion piece published by the New York Times on November 28th, former US president Jimmy Carter appealed to Mr Obama to recognise Palestine before leaving office.

Asked if the French and Irish governments would follow if the US recognised Palestine, Mr Ayrault said what was needed was to “create a favourable context for negotiation and the prospect of two states”. He noted that Mr Obama “will next January 20th leave his place to his successor” and added that “We are not waiting for a symbolic gesture. We want a concrete gesture.”

Mr Flanagan said it was “important that we maintain the viability of the two-state option and . . . that there be a proactive approach on the part of Europe. I acknowledge that the leadership is coming from France.”