Police and migrants continue to clash as authorities work on clearing out the southern section of a migrant camp near Calais. Video: Reuters 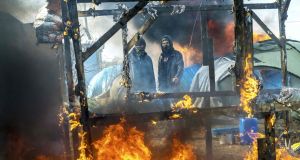 A makeshift shelter burns in the Jungle migrant camp in Calais, during the ongoing demolition of the camp’s southern half. Photograph: Philippe Huguen/AFP/Getty Images

In the midst of a hail storm, a Syrian refugee called Ismail tore off his anorak and shirt and exposed his naked chest to the pounding ice pellets, standing in the wasteland of the migrant camp known as “the Jungle”.

Ismail flailed his arms and cried out, over and over, “Thank you God!” while construction workers continued demolishing shacks, a few metres away behind the police line.

No one was certain what Ismail’s gesture meant, but it contributed to the apocalyptic mood.

Migrants cut or burn their fingertips because their prints could send them back to the country where they first entered Europe.

More Iranians sewed their mouths shut yesterday in protest at the destruction of their shelters. A Kurdish women slit her wrists earlier in the week.

They recount their personal histories, but are incapable of projecting themselves into the future, because they have no future.

Dante’s inscription, “Abandon all hope ye who enter here” could hang over the entrance to the Jungle.

France’s interior minister Bernard Cazeneuve and Fabienne Buccio, the prefect of Calais, use Orwellian rhetoric to explain the mass expulsion.

“They say this is ‘humanitarian’, that it’s about moving the refugees to better accommodation.”

The clearance of the jungle receives far more coverage in British and Irish than in French media.

France is so preoccupied with its own economic and political problems that it seems incapable of addressing the plight of others.

Far more British than French volunteers have flocked to the jungle to help the migrants.

On February 25th, the day the expulsion order was upheld by a Lille tribunal, Buccio promised to give the residents of the southern part 10 days to consider offers to move to the northern section, which is to be preserved for the time being, or to a “welcome and orientation centre” (CAO) far from Calais.

The demolition in the southern section started four days later.

The French claim they destroy only shelters of migrants who have left is untrue.

The outcasts sit on the roofs of their shelters in a feeble attempt to halt the wrecking machines’ progression.

They have been ordered out of shacks on short notice, forced to leave meagre possessions behind.

Nor does the promise to take care of every migrant hold up to scrutiny.

The judge who confirmed the demolition order said there were 300 beds still available in 125 heated freight containers in the northern part of the camp, 200 places in the women’s centre and 405 in CAOs, making for a total capacity of 905 places.

The prefect claims there were only 800-1,000 people living in the southern Jungle.

“They deliberately underestimate the number, because human rights law says if you evict someone, you have to have a place for them,” says Moseley.

“There are 5,500 hot meals served here every night, and some cook for themselves. We can tell from the amount of water they consume.”

Frenchwoman Maya Konforti has greying hair and a weathered face.

She has volunteered for two years with the L’Auberge des Migrants humanitarian group.

“It’s a catastrophe to see all the work we’ve done destroyed,” she says. “Our government is disgusting. They lie.They’re forcing people to leave.

It was the [French] state that told them to come here a year ago, and just when it was becoming bearable, they tear it all down.”

On a typical day this week, the authorities persuaded 43 residents of the camp to leave in buses for the CAOs, which were established in the autumn to receive overflow from Calais.

Local taxi drivers said up to 150 arrived at the Jungle the same day.

There are reports of squats on the Boulevard Gambetta and Avenue Louis Blériot in central Calais.

In theory, EU member states have promised to grant asylum to large numbers of Syrian war refugees, but it’s not happening.

Wassim Sabbagh (36) worked as a telecommunications technician, baker and painter in Damascus.

His wife was wounded by shrapnel, and now waits with their two sons in Beirut. The family want to go to Canada or Ireland.

“The Europeans say they’ll take Syrians,” Sabbagh says. “But there are 300 Syrians in the Jungle right now, and nobody wants them.”

Grainne Hassett, an architect and professor at the University of Limerick, used donations to build a women and children’s centre, a vaccination centre, a therapy and community centre and a youth centre for unaccompanied minors, all in the southern Jungle.

The community buildings created what Hassett calls “a framework for the profound relationships between people” in the Jungle.

They are to be spared, for the time being.

“But they’ll be facing each other across a desolate wasteland,” Hassett says.  She knew the French authorities would eventually destroy her handiwork.

“If they only lasted for a week and saved a life, that’s fine . . . There was a lot that was beautiful in the southern part of the Jungle, and a lot that was dark.”