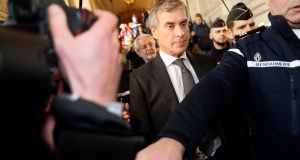 Former French minister for the budget Jerome Cahuzac has been sentenced to three years in prison in one of the biggest political scandals of President Francois Hollande’s government.

A Paris court ruled that Cahuzac was guilty of tax fraud and money laundering for hiding his wealth in tax havens around the world. The court said Cahuzac committed irregularities “of an extraordinary and rare seriousness”.

Cahuzac (64), who has also been banned from running for office for five years, can appeal against the ruling and will remain free in the meantime.

Cahuzac and his ex-wife Patricia Menard have acknowledged owning illegal foreign bank accounts for two decades. They have already paid €2.3 million in back taxes to French authorities. Menard was sentenced to two years in prison for tax fraud.

As minister for the budget, former cosmetic surgeon Cahuzac hid his wealth at the same time as he was leading the government’s fight against tax evasion.

The hidden wealth of the couple was estimated at €3.5 million in 2013, when Cahuzac was forced to resign after only 10 months in office. But the real value was probably much higher because the money helped the couple finance a lavish lifestyle over the years, prosecutors have said.

The fortune was concealed in bank accounts in Switzerland, Singapore and the Isle of Man, after transiting sometimes through dummy companies in Panama and the Seychelles, according to court documents.

During the trial in September, prosecutors blamed the former minister for making France “the laughing stock of the entire world” and called the couple “among the biggest fraudsters” of whom French authorities have been aware.

Before becoming a prominent Socialist politician, Cahuzac built his wealth on his professional activities as a plastic surgeon in the hair transplantation clinic he operated with his ex-wife, a 61-year-old dermatologist, and as a consultant for big pharmaceutical laboratories.

On trial alongside Cahuzac and his ex-wife were a banker, a legal adviser, and bank REYL, a respectable but little-known Swiss establishment, all convicted of money-laundering for helping Cahuzac conceal his assets in tax havens.

When press reports first revealed the scandal in December 2012, Cahuzac was sponsoring a Bill to reinforce the fight against tax evasion and fraud.

After strongly denying any fraud for months and publicly lying to parliament, on television, to the French people and to his government colleagues, Cahuzac eventually admitted his wrongdoing in a statement in April 2013, saying he had been “trapped in a lying spiral”. French law does not sanction perjury.

With the French presidential election less than five months away, Thursday’s verdict is sure to revive voters’ memories of the scandal that tarnished Mr Hollande’s mandate from the start.

The case fuelled public mistrust of traditional politicians and demands for more transparency, issues that are surfacing in the electoral campaign.

France has since tightened its legal arsenal to fight tax fraud and evasion.