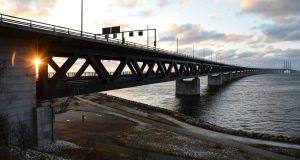 A German government spokesman said the moves by Stockholm and Copenhagen, taken in response to the growing pressures of the migration crisis, had put the Schengen free movement system “in danger”.

The new measures ended the through-rail service from Copenhagen to Malmö, across the 8km Øresund Bridge.

Denmark’s state-owned rail company has erected platform checkpoints at Copenhagen’s Kastrup Airport station, checking all passengers before they board its Malmö-bound train. Once across the border, Swedish officials check passenger IDs once again on the train.

About 18,000 commuters use the rail connection daily and, though a DSB spokesman said the checks had caused no major delays on Monday, many commuting Swedes will only return to work after a Wednesday holiday.

Denmark’s temporary border checks will be reviewed in 10 days.

“I am well aware there are no simple solutions,” said prime minister Lars Løkke Rasmussen, “but we can and must protect and take care of Denmark.”