Four men on trial in absentia for murder of Rafik Hariri 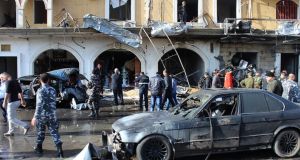 Lebanese citizens and policemen gather at the site of a car bomb at a stronghold of Lebanon’s militant Hezbollah group, in the center of the predominantly Shiite town of Hermel, northeast of lebanon, which is about 16km from the Syrian border. Photograph: AP

The dock at the UN-backed Special Tribunal for Lebanon remained empty yesterday as four men went on trial in absentia for the murder in 2005 of former Lebanese prime minister Rafiq Hariri, a fierce opponent of Syrian intervention in his country.

Nine years after the Beirut seafront car bomb that left Hariri and 21 others dead, the four suspects remain on the run, and Hassan Nasrallah, leader of the pro-Syrian Shia paramilitary organisation, Hizbullah, of which they were members, has warned: “Any hand that touches them will be cut off.”

Despite that, the court in the former headquarters of the Dutch security services in The Hague is due to hear some 500 witness statements and hundreds of hours of legal submissions in a trial that could last years – already preceded by a complex investigation costing some €250 million.

Three years ago, Hizbullah toppled a national unity government led by Hariri’s son, Saad, because he refused to cut the country’s ties with the tribunal – and yesterday Saad and other family members sat in court behind the victims’ representative watching justice finally begin to unfold.

As the hearing got under way, a suicide car bomber killed four people in an attack on a Hizbullah stronghold town of Hermel, near the border with Syria – just the latest evidence that the new era of peace and justice for Lebanon which the tribunal was supposed to usher in remains elusive.

Presiding judge David Re said everything possible had been done to bring the four defendants to court. “We will proceed as if the accused are present in the courtroom and have pleaded not guilty. The onus is on the prosecutor to prove their guilt.”

On a table in front of the five judges lay a model of downtown Beirut, which Hariri was widely credited with rebuilding after the country’s 15-year-long civil war and where his motorcade was blown to bits when a van containing explosives equivalent to 2.5 tons of TNT was detonated by a suicide bomber.

Prosecutor Norman Farrell said the amount of explosives used showed the attackers intended to send “a terrifying message and to cause panic among the population of Beirut and Lebanon. No one in Lebanon can fail to have been affected, directly or indirectly, by the attack. It is not that the perpetrators simply did not care if they killed their fellow citizens. Rather, they intended to do so. The attackers killed innocent bystanders: a student, a hotel worker, a cousin, a father, a brother, a daughter, friends ...”

Showing the court a photograph of Hariri’s vehicle in flames, he added: “The people of Lebanon have a right to this trial – and to seek the truth.”

Denial
Truth, however, has been in short supply. Hizbullah has consistently denied any involvement in the killing of Hariri, at the time the leader of the Sunni Muslim Future party dismissing the tribunal as part of a US-Israeli conspiracy – and claiming Israel has penetrated Lebanon’s telecommunications network to fabricate a case against the defendants.

Although the attack was initially blamed on pro-Syrian Lebanese generals, the court in 2011 issued warrants for Mustafa Badreddine (52), Salim Ayyash (50), Hussein Oneissi (39) and Assad Sabra (37). A fifth suspect, Hassan Habib Merhi (48), was indicted last year and his case may yet become part of the current trial. Each of the four defendants faces nine charges, ranging from conspiracy to commit a terrorist act to homicide and attempted homicide.

The prosecution alleges that Badreddine and Ayyash “kept Hariri under surveillance” before the attack, while Oneissi and Sabra issued a false claim of responsibility to mislead investigators.