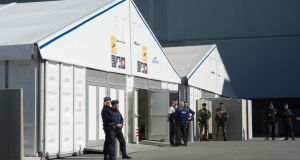 The first passenger flight has left Brussels Airport since it was closed after bombings on March 22nd blew up its departures terminal.

A Brussels Airlines flight heading to the Portuguese city of Faro has taken off from the airport, one of three services scheduled for Sunday.

Airport chief executive officer Arnaud Feist said the flights leaving on Sunday are “a sign of hope” that even partial passenger service could resume so soon following “the darkest days in the history of aviation in Belgium”.

The airport has been shut since suicide bombings at the hub and in the Brussels subway killed 32 victims and wounded 270. The attacks were claimed by the Islamic State group.

Security at the airport was tight on Sunday with completely new check-in procedures for passengers.

Mr Feist said Belgium’s biggest airport should be back at about 20 per cent of capacity from Monday and able to process 800 passengers an hour. Mr Feist hopes full service can be restored by the beginning of July in time for the summer vacation season.

Police on Sunday were conducting spot checks of vehicles before they arrived and a large white tent was set up outside the terminal to screen IDs and travel documents before allowing anyone to enter the building. A drop-off parking area outside the terminal has been closed.

The bombers entered the check-in area with suitcases packed with explosives and nails, and the resulting blasts collapsed the ceiling and shattered windows in addition to killing 16 people.

Until the terminal can be fully repaired, Mr Feist said departing passengers will first enter a temporary structure erected on the tarmac, then go to a specially-built check-in area.

There will be no access by rail or public transport to the airport for the foreseeable future, he said.

Delta, meanwhile, said it was suspending service between Atlanta and Brussels until March 2017 due to the continued uncertainty surrounding the airport’s re-opening and weakening demand.

2:30 No new taoiseach elected as voting concludes on first day on new Dáil