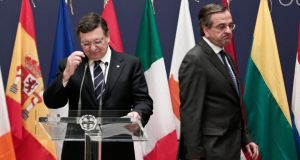 Greek finance minister Yannis Stournaras insists that Greece will do its best to avoid a third bailout, despite an estimated €11 billion financial gap in its current rescue programme, as Greece yesterday formally assumed the rotating presidency of the Council of the European Union.

Ahead of the opening ceremony in Athens, attended by EU commissioners and European Commission president José Manuel Barroso, the Greek finance minister insisted that Greece had turned a corner.

“We are assuming this presidency not as a country in crisis but as a country that is back on the path to recovery,” he said, noting the country’s return to a primary surplus and implementation of a range of structural economic reforms.

His message of optimism was echoed by Greek prime minister Antonis Samaras who dismissed suggestions that the Greek government, which has seen its majority dwindle to three, was facing the threat of political instability.

“There is stability in this government. This is a stable government. [It] will remain stable until the next elections which I hope will take place in 2016.”

However, he stressed that the Greek people had been subject to unprecedented austerity measures, since it became the first euro zone country to seek a bailout in May 2010, a move that ultimately led to the country seeking €240 billion worth of loans.

“Greece lost a standard of living that no other people have lost since the second World War,” the prime minister said, although he added that the path to recovery lay with “more Europe, better Europe, a more cohesive Europe.”

Greece assumes the rotating presidency at a delicate time in its relationship with the European Union. The troika is due to return to Athens next week, having suspended a number of review missions amid recurring disagreements between it and Athens about the scale of budget cuts needed next year.

Mr Stournaras said it was too early to discuss whether Greece would need a third bailout when it programme finished at the end of the year. “Ideally we would like no new loans, but at the end of the day we will compare alternatives and take the decision for the benefit and welfare of the Greek people,” he said.

However, he stressed that further “fiscal conditionality” was “out of the question.” “It’s already too tough,” he said.

Although he ruled out another debt writedown, he said Greece would be pursuing debt reduction through other means, such as interest rate reductions and lengthening of loan maturities.

Greece has implemented a string of economic reforms as a condition of its bailout package, including a 20 per cent contraction of the public sector work force, a reduction of between 20 and 30 per cent in the minimum wage and a range of healthcare reforms.

While the general government deficit has been reduced to an estimated 2.2 per cent of GDP from 15.6 per cent in 2009, unemployment has risen to 27 per cent, with about 60 per cent of people under 25 without work.

As well as progressing banking union, Greece is also putting migration policy at the heart of its presidency agenda, with immigration expected to be the focus of next June’s summit of EU leaders.