Nobody held to account for ‘murder’ of 500 migrants in April, investigation finds 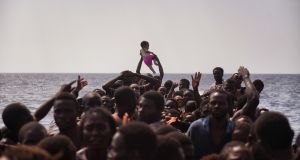 Migrants wait to be rescued in the Mediterranean Sea, north of Libya, on October 4th. About 500 died when a boat capsized in April. Photograph: Aris Messinis/AFP/Getty Images

The head of Europe’s police agency said it would “look again” at the largest migrant shipwreck in the Mediterranean this year after an investigation by Reuters and BBC Newsnight exposed a gap in the response by law enforcement.

Rob Wainwright, director of Europol, said his agency would reconsider the shipwreck, given “the absence of any clear answers”.

The investigation into an incident on April 9th, in which an estimated 500 people drowned, raised “uncomfortable” issues, Mr Wainwright said. It found that no official body, national or international, has held anyone to account for the deaths or even opened an inquiry into the shipwreck.

Only 37 people survived when an Egyptian trawler capsized as its crew of smugglers loaded more migrants on board from a smaller feeder boat. The survivors, who eventually reached Greece on April 16th, said that the smugglers abandoned the scene, leaving up to 100 people still alive in the sea. They said the smugglers used force to stop survivors on the feeder boat rescuing others.

Among the dead were an estimated 190 Somalis, about 150 Ethiopians, 80 Egyptians, and some 85 people from Sudan, Syria and other countries.

In interviews with Reuters and Newsnight, Mr Wainwright said that in hindsight his agency should have investigated the April sinking, and the media inquiries might have exposed a “gap here in the collective response by Europe” to such cases.

Italy, where the ship was headed, has not investigated the sinking. Nor has Greece, where the survivors landed. Both countries judged that no crime had occurred within their jurisdiction.

There has been no investigation by any United Nations body, the European Union’s frontier agency, the North Atlantic Treaty Organization, or the EU naval taskforce in the Mediterranean. All said investigating the incident was not within their mandate.

Reuters has identified the owners of the doomed ship and the ringleaders of the voyage, as well as the alleged people-brokers who assembled the migrants in Cairo and Alexandria and took their money.

The investigation also revealed that, under pressure from smugglers, some survivors initially lied about the journey, stating that they left from Tobruk, Libya, instead of Alexandria, Egypt, their real departure point.

In Egypt, Judge Khaled al-Nashar, assistant to Egypt’s minister of justice for parliamentary and media affairs, said he could not confirm what inquiries had taken place into the April sinking.

But he said Egypt had just passed new laws against illegal migration and was determined to take action against smugglers.

He said further action over the April sinking was not ruled out. “If the occurrence of such a crime is proven, Egypt certainly will not hesitate to conduct the necessary investigations to uncover it and arrest the perpetrators and bring them to justice.”

Some Egyptian lawyers believe the smugglers’ actions may have amounted to murder.

“I consider putting 500 people on this boat to be murder. There is no other way to describe it,” said Sabry Tolba, an Egyptian lawyer hired by the families of some of those who died.