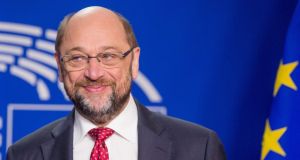 A move is underway in the European Parliament to exclude sitting British MEPs from key committee positions before Britain leaves the European Union amid worries the UK could shape EU legislation before it exits the bloc.

European Parliament president Martin Schulz has written to the head of the conference of committee chairs asking him to gather information on how Britain’s imminent departure will impact various EU documents passing through the parliament’s committees. Among the issues that should be considered, the letter states, are the possible impact of the British departure on the legislative files currently under discussion in various committees, the impact if the files are not concluded before Britain leaves, and whether any of the files are likely to feature in the EU-UK withdrawal agreement.

The heads of committees will present the reports by January, when a decision on whether to sideline British MEPs from certain committee positions will be made.

The request by the parliament president reflects growing concerns from a number of MEPs that British MEPs may attempt to influence EU legislation to suit Britain’s own agenda as the country prepares for Brexit.

Under the EU treaties, Britain continues to be a full, participating member of the European Union until it officially leaves the bloc. To date, ministers and MEPs have been playing a full role in the EU decision-making process – foreign secretary Boris Johnson and defence secretary Michael Fallon, for example, attended meetings of EU foreign and defence ministers this week in Brussels. However, it is envisaged that the EU will hold more meetings as 27 rather than 28, alongside its regular council meetings when Britain’s exit negotiations officially commence.

But officials from some member states are concerned that the presence of British ministers and officials in the room once official withdrawal negotiations begin when article 50 is triggered would give an unfair advantage to Britain during the negotiations.

Fine Gael MEP Brian Hayes says he is opposed to curtailing the rights of British MEPs while they are still members of the European Union. “We cannot have a second-class of members of the European Parliament, and it would also be unconstitutional under the terms of the existing EU treaties,” he said. “In addition it would also send a very bad message to Britain ahead of the negotiations that we would simply limit the rights of British MEPs.” There is also a possibility that the withdrawal negotiations could last more than two years, he says.

Britain continues to be a key ally of Ireland in most areas of EU policy, particularly in the field of financial services.

Britain’s liabilities, which includes everything from pension bills to EU-funded projects in Britain and future EU budget commitments, will be up for negotiation.

Discussions are also beginning about how to fill the budgetary hole that will be left by Britain once it leaves. The bloc’s second-largest member makes made a net contribution of about €10 billion to the EU budget last year, leaving the remaining members with the choice of meeting that shortfall or reducing the overall size of the EU budget.