O’Keeffe judgment is latest in long line of landmark decisions 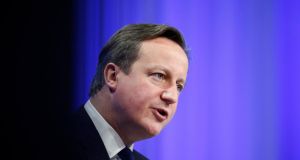 Britain used its six-month chairmanship of the Council of Europe two years ago to call for change, with David Cameron arguing the sheer volume of cases meant “the very purpose of the court – to prevent the most serious violations of human rights – is under threat”. Photograph: Jason Alden/Bloomberg

This week’s judgment by the European Court of Human Rights on a case brought by Irish woman Louise O’Keeffe is the latest ruling by the court that could have deep implications for Irish law.

Irish social history has been dotted with rulings by the Strasbourg-based court that have profoundly shaped the law of the land over the last 50 years. David Norris’s landmark action against the State in 1979 led to the decriminalisation of homosexuality in Ireland. The more recent ABC abortion case, which found that the State was in breach of the Convention on Human Rights, exerted political pressure on the government to legislate for the X-case ruling.

In the public response to the O’Keeffe judgment, many commentators have coyly remarked that it took a European court to hold the State to account, welcoming the existence of an alternative legal avenue for citizens.

Just as EU employment law is widely credited with advancing women’s right to equal pay and conditions in Ireland during the 1970s and 1980s, Ireland’s obligations under European law have been viewed as a welcome instigator of Ireland’s move away from the entrenched social conservatism that characterised Irish identity post-independence.

Valued ideal
At a time when public support for Europe is fading, Ireland’s obligation to abide by rulings of higher courts is one of the few aspects of the European ideal that people value.

Not so in Britain. Across the water, the European Court of Human Rights is being held up by Eurosceptics as another example of excessive European interference.

Although not a European institution – the European Court of Human Rights is attached to the Council of Europe, an assembly of 47 countries – the ECHR has nonetheless become embroiled in Britain’s fraught relationship with Europe.

At issue is a series of judgments on criminals’ rights. A ruling dating from 2005 which states that prisoners have a right to vote and a separate judgment imposing restrictions on the deportation of foreign criminals have been strongly questioned by the British government.

Britain has long argued the case for reform, criticising the large backlog of cases at the Strasbourg court. It used its six-month chairmanship of the Council of Europe two years ago to call for change, with Cameron arguing the sheer volume of cases meant “the very purpose of the court – to prevent the most serious violations of human rights – is under threat”. Britain also argued the court had too much power, pointing out countries like Britain adhere to the European convention rules better than others and so more freedom should be given to national courts, a position refuted by human rights groups like Amnesty.

In a country proud of its common law history, the debate over the power of the European Court of Human Rights has become a debate about national sovereignty, with critics of the court, including former lord chief justice Lord Judge, arguing that it undermines the sovereignty of British parliament.

But despite strong opposition, the question remains over how far the country can extricate itself from the European Court’s jurisdiction. The European Convention of Human rights is entrenched in British law through the Human Rights Act.

Conservative thinking
While the Tories have suggesting abolishing the Act and replacing it with some kind of Bill of rights, this would likely be blocked by their coalition partners, though it is likely to form part of the Conservative Party’s next election manifesto.

The European Court of Human Rights is not the only court that irks Britain. The UK has brought a number of legal challenges to the Luxembourg-based European Court of Justice, which settles legal disputes between member states and EU institutions. Most are in financial services legislation – a constant source of tension between Brussels and London. Last week the ECJ rejected Britain’s challenge to EU laws on short-selling.

The irony that Britain was one of the founding members of the Council of Europe and heavily influenced the composition of the convention is not lost on British critics of the system, who argue the court’s initial premise, established after the second World War, needs to be adapted for a modern world. But for those who passionately defend the European Court of Human Rights, its promise to uphold the rights of citizens should not be up for negotiation. For the thousands who have successfully brought their claims of human rights abuse to Strasbourg, its bureaucratic excesses are a price worth paying.