Thousands of 'No' voters stage party in Athens and celebrate the outcome of a referendum that they say slapped down the architects of a five-year austerity drive that has ravaged the economy of the debt-ladden country. Video: Reuters 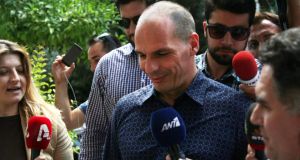 Mr Varoufakis resigned on Monday, removing a major obstacle to any last-minute deal to keep Athens in the euro zone after Greeks voted resoundingly to reject the austerity terms of a bailout.

“I was made aware of a certain ‘preference’ by some Eurogroup participants, and assorted ‘partners’, for my... ‘absence’ from its meetings; an idea that the Prime Minister judged to be potentially helpful to him in reaching an agreement,” Varoufakis said in a statement.

His sacrifice, after promising Greeks he would win a better deal within a day of their overwhelming referendum vote, suggested leftist Prime Minister Alexis Tsipras is determined to try to reach a last-ditch compromise with European leaders.

Greek fate in hands of ECB and Merkel

With banks shuttered, cash machines running out of banknotes and sympathy for Athens among EU governments close to exhausted, Greece’s fate is largely in the hands of the European Central Bank and of German Chancellor Angela Merkel.

Merkel and French president François Hollande will meet in Paris on Monday afternoon to discuss the crisis, while European Council President Donald Tusk announced that euro zone leaders would meet in Brussels on Tuesday evening.

The ECB’s policymaking governing council is holding a conference call on Monday to decide how long to go on keeping Greek banks afloat after the overwhelming rejection of bailout terms the central bank had helped to shape.

Merkel, under mounting pressure in Germany to cut Greece loose from the euro zone, meets French President Francois Hollande in Paris later in the day to seek a joint response ahead of an emergency summit of euro zone leaders in Brussels on Tuesday.

Public opinion in Europe’s biggest economy is fast turning against any further aid to Greece, and Merkel’s vice-chancellor, Social Democrat Sigmar Gabriel, said on Sunday that Tsipras had torn down the last bridges of compromise with the euro zone.

After five years of economic crisis and mass unemployment, Greek electors voted 61.3 percent ‘No’ to the bailout conditions rejected this month by their radical leftist government, casting Greece into the unknown.

“You made a very brave choice,” Tsipras said in a televised address as jubilant supporters thronged Athens central Syntagma Square to celebrate the act of defiance of Europe’s political and financial establishment.

“The mandate you gave me is not the mandate of a rupture with Europe, but a mandate to strengthen our negotiating position to seek a viable solution.”

The ECB’s policymaking governing council was meeting to decide whether to maintain, increase or reduce a lifeline for Greek banks, which have been shuttered for a week with cash withdrawals rationed and money fast running out.

Several people familiar with ECB policy said the central bank would reject a Greek government request to raise the cap on emergency liquidity assistance provided by the Greek central bank and leave the limit unchanged, slowly tightening the noose on the banks but giving them a few more days air.

The euro tumbled against the dollar on Asian markets after the setback for Europe’s monetary union and European shares and bonds were expected to take a hit when markets opened after the weekend.

Asian stocks suffered the biggest daily fall in two years, partly because of fears over China’s economy, but Varoufakis’ departure may soften the impact in Europe, maintaining a slender prospect of a last minute deal to keep Greece in the euro and avoid a catastrophic bankruptcy.

“The first message to Athens is that no one ever wants to see Varoufakis again after he called us terrorists,” an official who attends Eurogroup meetings said.

It was not clear whether Hollande or top EU policymakers had conveyed that message to Tsipras in telephone calls on Sunday evening after the referendum result became clear.

A lesson in democracy

In a parting blog post celebrating the Greek ‘Oxi’ (‘No’) vote, Varoufakis said Greeks had taught Europe a lesson in democracy and should now demand better financial rescue terms.

“It is, therefore, essential that the great capital bestowed upon our government by the splendid ‘No’ vote be invested immediately into a ‘Yes‘ to a proper resolution - to an agreement that involves debt restructuring, less austerity, redistribution in favour of the needy, and real reforms.“

EU officials said it would be hard to give Greece easier terms, not least because its economy has plunged back into recession since Tsipras’ Syriza party won power in January, leaving public finances in a worse position than when the rejected bailout deal was put together.

Analysts with several major banks including Citi, Barclay’s and JP Morgan said a “Grexit” from the euro zone was now their base case, or most likely scenario.

Analyst Kathleen Brooks of GAIN Capital, a foreign exchange firm, branded Greeks “Oxi-morons” and said the likelihood of Athens leaving the euro zone was now 80 percent, although it would take years of negotiation.

But on the streets of Athens, citizens were unrepentant at their defiant vote.

“I voted ‘No’ to austerity; I want this torture to end,” said 42-year-old Katerina Sarri, a mother of two working at a Kiosk in Athens.

“I’m aware that we will suffer for years but I’m still hopeful. I need to know that there is light at the end of tunnel, that the lives of my children will be better,” she said.

The Greek people have given “a decisive view” in yesterday’s referendum, Number 10 Downing Street has said this morning, just hours before British Prime Minister David Cameron meets with advisers and ministers to discuss the implications of the vote for the United Kingdom.

“This is a critical moment in the economic crisis in Greece. We will continue to do whatever is necessary to protect our economic security at this uncertain time. We have already got contingency plans in place and later this morning the Prime Minister will chair a further meeting to review those plans in light of yesterday’s result,” said a spokesman.