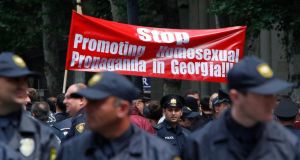 
The European Union has denounced a violent attack by thousands of Georgians – with Orthodox priests in the vanguard – on a few dozen gay rights campaigners in the capital Tbilisi.

About 50 people gathered in Tbilisi’s main square to mark the International Day Against Homophobia, but they were quickly confronted by about 5,000 angry demonstrators who broke through police lines and forced them to take refuge on buses provided by the authorities.

About 30 people were hurt, including 20 police officers, as the protesters pursued the campaigners across the square and surrounded the buses, hurling stones and beating sticks against the windows.

The EU delegation in Tbilisi said yesterday it was “dismayed by the scenes of brutal intolerance and violence committed by some demonstrators on 17 May with a declared desire to prevent other demonstrators from expressing themselves peacefully.

“The EU calls on the government of Georgia to uphold the international and European standards of freedom and equality in dignity and rights to which it has committed itself [and] urges Georgia to defend the human rights of all its citizens using all the means at its disposal.”


Conservative values
Georgia hopes to join the EU but, like many countries in eastern Europe and the former Soviet Union, the conservative values held by most people are in stark contrast to the liberal social mores of member states to the west.

Prime minister Bidzina Ivanishvili said before the rally that police should protect the gay rights campaigners and allow them to express their views, but activists subsequently criticised the police for failing to keep the mob at bay and for not arresting anyone involved in the violence.

Patriarch Ilia II of the influential Orthodox Church has called homosexuality an “anomaly and disease” that was an “insult” to Georgian traditions.