A quarter century after it was rescued from destruction, multimedia material documents secret police methods 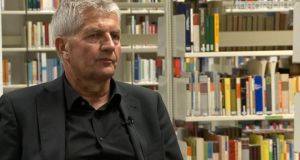 Roland Jahn, a former civil rights activist and now the third custodian of the Stasi files: “This is about giving people, particularly the younger generation, a chance to interact with the Stasi and SED dictatorship with documents and files from the archive”

A quarter century ago, officers of East Germany’s Stasi secret police worked around the clock to destroy decades of files. When the overworked shredders began to melt, they tore up papers by hand.

Angry civil rights protesters halted their work in January 1990 when they stormed the Stasi headquarters in Berlin to secure the archive. Now that archive has gone online, offering a unique insight into the workings of the secret police dubbed the “sword and shield” of East Germany’s ruling Socialist Unity Party (SED).

“For us this is about giving people, particularly the younger generation, a chance to interact with the Stasi and SED dictatorship with documents and files from the archive,” said Roland Jahn, a former civil rights activist and now the third custodian of the Stasi files.

The website – at present only in German – focuses on key moments in GDR history with Stasi involvement from the 1989- 1990 peaceful revolution back to the Berlin workers’ uprising of June 1953, put down by Soviet tanks that left at least 55 dead.

It is one thing to read about the Stasi, it is something else entirely to learn about its devious methods through its own material. The website contains 2,500 pages of documents, 250 images, six hours of audio and 15 hours of film material. In one recording, Stasi chief Erich Mielke gives his cynical take on the shoot-to-kill policy – denied by East Berlin.

“If one shoots then it should be done in a way that the target doesn’t get away but has to stay with us,” Mielke can be heard saying. “What on earth is [the point of] . . . 70 shots fired off and he runs over to the other side and conducts a huge campaign?”

Another heart-rending case documented online is of Manfred Smolka, a former border guard who fled to the west, only to be arrested in August 1959 when he tried to get his family across. In viciously bureaucratic Stasi Germany, the secret police documents lay out how they plan to ensnare him.

In an audio recording from his show trial, now on the website, Smolka pleads for a milder sentence. “I ask . . . for hope, even if it is far in the future, a hope of a future,” he said. The court rejected his plea and, on the basis of falsified documents and confessions obtained under Stasi torture, imposed a death sentence. Smolka was beheaded in 1960.

A quarter century on, the interest in the Stasi files is as great as ever. In 2014, almost 68,000 people applied to see their personal file, with over three million file views to date. The total Stasi archive fills more than 111km of shelf space.