’I’ve been... struggling through therapy to make sense of this tragedy and insanity’ 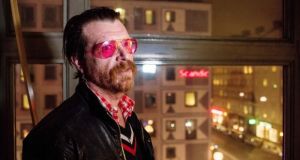 Eagles of Death Metal singer has apologised for alleging the security guards at the Bataclan were involved in the Paris attacks last year.

Jesse Hughes, the frontman of the band whose concert was targeted by the shootings last November where 90 people were killed, had made the comments during an interview with Fox Business.

He had suggested some of the some of the club’s security guards had been involved in the attack claimed by the Islamic State group.

The owners of the Bataclan in Paris had reacted angrily to Hughes’ original interview calling the comments “defamatory”.

“I humbly beg forgiveness from the people of France, the staff and security of the Bataclan, my fans, family, friends and anyone else hurt or offended by the absurd accusations I made,” he said in a statement.

“My suggestions that anyone affiliated with the Bataclan played a role in the events of 13 November are unfounded and baseless – and I take full responsibility for them.”

The attackers threw grenades and shot into the crowd in a series of coordinated attacks around Paris that killed 130 in total and injured more than 350.

Hughes continued to say: “I’ve been dealing with non-stop nightmares and struggling through therapy to make sense of this tragedy and insanity. I haven’t been myself since 13 November.”

Hughes said his opinions did not reflect the views of his bandmates or others affilliated with the group.

“I realise there’s no excuse for my words, but for what it’s worth: I am sincerely sorry for having hurt, disrespected or accused anyone.”