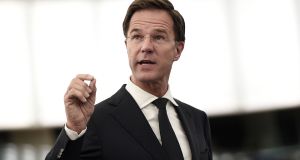 Dutch prime minister Mark Rutte said that he, like many other citizens woke up on the morning of June 24th feeling “pretty dreadful.” Photograph: Frederick Florin/Getty Images

Dutch prime minister Mark Rutte has urged the European Union not to continue with “business as usual” following the British referendum result.

He warned that to do so would “show complete disregard for the reality in member states.”

Addressing members of the European Parliament (MEPs) in Strasbourg to mark the conclusion of the Dutch presidency of the EU, Mr Rutte said that the “worst possible response” to Brexit would be to continue as before.

“I also believe it would be wrong to rush blindly forward towards more political integration and a more federal Europe because that too would be a denial of the sentiment felt by many European people, to whom the EU is - or has become - something remote and aloof.”

Mr Rutte said that he, like many other citizens woke up on the morning of June 24th feeling “pretty dreadful.”

“We are in uncharted territory. And we must be honest: even if we find the perfect way to handle this ‘divorce’, our problems won’t simply melt away. It’s not only British voters who have doubts about European cooperation. In other member states, too - including the Netherlands - there is widespread criticism and euroscepticism. And we need to address it.”

Following last week’s summit, the European Council has put any substantive discussion on the future of the European Union on hold until September at the earliest, when the EU’s 27 leaders, without Britain, will gather in Bratislava.

In an interview over the weekend, German finance minister Wolfgang Schauble said that now was not the time for “grand visions.”

Updating MEPs on last week’s summit, European Council president Donald Tusk said that leaders understood that “some time is needed to allow the political landscape to settle in Britain, but they also expect the intention of the UK government to be specified as soon as possible.”

European Commission president Jean-Claude Juncker, who has attracted criticism in some member states of his leadership of the EU’s executive arm, strongly criticised the behaviour of some advocates of a Leave vote.

“Those who have contributed to the situation in the UK have resigned - Johnson, Farage and others….They’re not patriots. Patriots don’t resign when things get difficult, they stay.”

He said he did not understand why those who had campaigned for Brexit now need months to decide how to proceed. “I would have thought they had a plan. Instead of developing a plan, they are leaving the boat.”

His views were echoed by Manfred Weber, the head of the centre-right European People’s Party (EPP) . “The standard bearers for Brexit - they’ve now jumped ship. We don’t know where Mr Farge is today, perhaps he’s on a tropical island enjoying himself.”

‘Need to respect the Brexit decision’

But the influential German MEP also reiterated that access to the single market for Britain involved free movement of people as well as goods. “We need to respect the Brexit decision. The framework for forthcoming negotiation is clear. The internal market is tightly linked with the basic freedoms. It’s not acceptable for lorries to be able to circulate freely on our motorways, but for our citizens to be stuck in front of barriers. That’s very important.”

Sinn Féin MEP Martina Anderson said that Brexit would damage Northern Ireland “more than it will damage anywhere else.”

“Brexit will turn the North into an economic basket case… The Democratic Unionist Party’s leave campaign was reckless and wrong and a political football was set up to get stronger links with Britain, harder borders and to destroy the economy of Ireland. The people of Northern Ireland voted to remain and they want that respected.”

While the European Community that Ireland joined with Britain in 1973 was a project of “peace and prosperity,” the EU which has brought the euro to the fore has been a “catastrophe.”

Ireland had been “blackmailed and bullied into taken loans that weren’t ours,” he said, adding: “Undo this union, starting with Lisbon and Nice.”

British Liberal Democrat MEP Catherine Bearder said she spoke for the 48 per cent of people who had voted to remain in the European Union, criticising what she described as a “poor campaign, packed with lies.”

Janice Atkinson, a former UKIP MEP said it was imperative that Jean-Claude Juncker and the European Commission takes no part in the forthcoming negotiations, stressing the importance of trade to the talks.

“The 52 per cent voted. We are going. The United Kingdom has the Commonwealth. Our Queen is the head of state of many countries. Maybe this is why you need to be part of this sclerotic union,” she told MEPs.