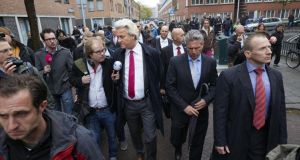 The leader of the Dutch far-right Party for Freedom Geert Wilders speaks to the press during his visit to the Schilderswijk district in The Hague. Photograph: Martijn Beekman/AFP/Getty Images

There have been calls for an urgent debate in the Dutch parliament about the integration of Muslim immigrants amid claims that one area of The Hague, known locally as “the Sharia triangle”, is being run by a form of unofficial Sharia police.

The claims relate to the district of Schilderswijk, about two kilometres from the city centre, where an almost entirely Muslim population of some 5,000 people surrounds the El Islam mosque, fuelling criticism that the government has failed to ensure a proper ethnic mix in schools and local housing. One recent investigation, in which local people were extensively interviewed, concluded that Schilderswijk had become “orthodox Muslim territory” which was now largely ignored by the city authorities, by politicians and even by the police, on the grounds that it had become self-regulating.

The investigation found that orthodox Muslims had become so dominant that they were dictating what people in the neighbourhood wore and how they behaved.

“The norms of the majority are beginning to take over,” it said.

In the case of women, dress was a particular issue. One woman told how her daughter had been approached and told her short skirt was inappropriate, while her son had been called a “kaffir” – a racist term formerly used in colonial South Africa to refer to a black person – for smoking.

A youth who had previously been involved in local gangs said that criminality had dropped off, not because of the police, but because he and his friends were “afraid of the wrath of Allah”.

Another man said he felt he was gradually being driven out of his home because he had a dog, and many traditional Muslims tended not to keep or favour dogs.

A veiled Muslim woman, however, defended Islamic practices, and said dressing modestly would “do the locals good”. She pointed out that women in the Dutch ultra-conservative, largely Protestant, Bible Belt also wore long dresses, and that shops there were closed on Sunday – as many in Schilderswijk were on Fridays.

Local police chief Michel de Roos said: “We have no indications there is a form of Sharia police here. That is not to say it does not happen, but we are unaware of it.”