The Spanish train that derailed entered a sharp bend at high speed then careered off the tracks, smashing into a wall running alongside the rail. At least 78 people died and 130 were injured in Spain's worst train disaster in 40 years. 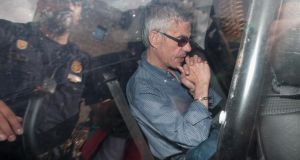 Train driver Francisco Jose Garzon Amo, (53) is taken in a police car from police station to the preliminary court in Santiago de Compostela, Spain. The high-speed train crashed after it derailed on a bend as it approached the north-western Spanish city of Santiago de Compostela at 8.40pm on Wednesday. At least 79 people have died and over 130 are reported injured. The crash occured on the eve of the Santiago de Compostela Festivities. Photograph: Pablo Blazquez Dominguez/Getty Images 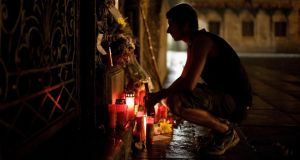 A man reads messages in memory of the train crash victims outside the Cathedral at Plaza do Obradoiro. The high speed train crashed after it derailed on a bend as it approached the north-western Spanish city of Santiago de Compostela on July 24th. Photograph: Pablo Blazquez Dominguez/Getty Images 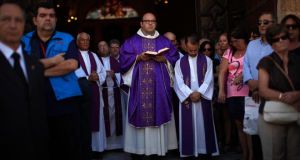 Priests and mourners await the arrival of the coffins of couple Antonio Reyes Asensio and Maria Rosa Quijano Fernandez, two of the victims of Wednesday’s train crash in Santiago de Compostela, outside Iglesia Mayor church in San Fernando, near Cadiz, southern Spain. Survivors and families of victims from Spain’s deadliest train crash in decades were desperate for answers as to why the eight-carriage, high-speed train derailed on a sharp bend, slamming into a concrete wall. Photograph: Jon Nazca/Reuters

The driver of a Spanish train that derailed at high speed was taken before a judge for questioning this evening as officials try to determine to what degree he was responsible for the deaths of 79 people in the accident.

Francisco Garzon (52) has been under the arrest since shortly after the accident on suspicion of reckless homicide, but has yet to be formally charged by a magistrate.

The experienced driver was travelling at more than twice the 80 km per hour permitted on a curve going into the city of Santiago de Compostela when the train careered off the track and smashed into a wall on Wednesday.

The death toll from Spain’s worst train disaster in decades rose to 79 after one injured person died this morning. Seventy people remain in hospital with injuries from the crash, which crumpled the train and set some carriages on fire. Of those, 22 are in critical condition.

After the accident, Mr Garzon spoke with both the train system control centre and emergency dispatchers, his face covered in blood from a head wound. Spanish newspapers have reported that transcripts of those communications show that he recognised he was going too fast.

Mr Garzon, who was released from hospital yesterday but remained in police custody, arrived at Santiago de Compostela’s main courthouse at 6.15pm in a police car with darkened windows.

It was not clear how long the closed-door hearing with the judge would last. Neither lawyers nor members of Garzon’s family could be contacted for comment.

The judge will investigate the case and will also look at whether the train, the tracks or the security system that slows down the trains were at fault.

The Alvia train, one of three types of high speed train services that run in Spain, received a full maintenance check on the morning of the journey, the head of state train company RENFE said, and security systems in place were in good shape.

“As far as we know the train was in perfect condition when it set off on its journey,” Julio Gomez-Pomar told newspaper ABC.

The Alvia trains run both on traditional tracks, where drivers must heed warning systems to reduce speed, and on high-speed tracks where a more sophisticated security system will automatically slow down trains that are going too fast.

At the section of the track where the accident happened, it was up to the driver to respond to prompts to slow down.

But Mr Gomez-Pomar rejected criticism that the safety system was insufficient, saying the debate “does not make much sense”.

Santiago was meant to be celebrating the yearly festival of St. James on July 25th, with thousands of Christian pilgrims arriving after walking the famous Camino de Santiago ancient pilgrimage trail.

A week of concerts and other cultural events were cancelled after the train crash on the eve of the Saint’s day. Today, black ribbons of mourning hung on the empty stages that had been set up.

Pilgrims, many of them fresh off the trail and carrying backpacks, crammed into a standing-room-only Mass in Santiago’s centuries-old cathedral where they were asked to remember the victims of the accident.

At the cathedral gates, along with flowers and candles commemorating the dead, some people left walking sticks from their journeys and others placed shells, the symbol of St James and badge of honour for the pilgrims who complete the journey.

Prime minister Mariano Rajoy, who visited the crash site soon after the tragedy, is due to return to Santiago, the city where he was born, for an official funeral ceremony for the victims tomorrow.

Dolores Mato (57) a shopkeeper close to the ancient cathedral, expressed sympathy and grief for the victims and their families, but also for Mr Garzon, who she said had been “crucified” in the media.

“I really think something must have gone wrong on that train. It couldn’t have been only his fault,” she said.

Yesterday the head of the Galician regional government, of which Santiago is the capital, said the accident was being used as an excuse to criticise Spain’s high-speed train capabilities.

Train drivers union Semaf say the treatment of Mr Garzon at this early stage in the investigation has been inappropriate.

“(The police) are using information which hasn’t been checked, without having the official version, to arrest this man. You can’t take someone away in handcuffs like that, it leaves a great deal to be desired,” Santiago Pino, Senaf spokesman, said.