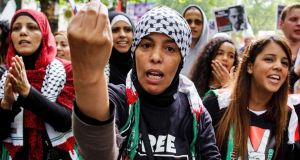 Demonstrators at a rally for Al-Quds Day, an event intended to express solidarity with the Palestinian people, in Berlin yesterday. Photograph: Carsten Koall/Getty Images

They faced off across the Kurfürstendamm yesterday afternoon. Separated by 1,000 police in riot gear, around 1,200 pro-Palestine and 700 pro-Israel demonstrators swapped slogans and insults above the heads of Berliners, who stood on street corners and argued loudly and helplessly over the Gaza conflict.

“There are too many people dying in Gaza to call this a war, it’s a one-sided massacre,” argued one elderly woman.

“No state can tolerate rockets zipping over its citizens’ heads,” shot back a younger German man. “Would you like that?”

Germany is in a dilemma over the Gaza conflict. The shadow of the Holocaust leaves politicians cautious about criticising Israel, but heated anti-Israel marches are now a daily occurrence. One such demonstration made world headlines when pro-Palestine demonstrators jeered “Jew! Jew! Cowardly Pig!”

Free speech On the front lines, Berlin police say they see a new generation of young radical men, often Muslims with a migrant background, who have no inhibitions when it comes to criticising Jews or Israel. But police are cautious about intervening, saying it’s not their job to be on-site arbiters of free speech and its limits.

“Most Germans are afraid to take a side in case it’s the wrong one,” said Dr Frode Anderson, a Norwegian academic in Berlin since 1972, sporting a Kippah and a Claddagh ring.

“But how can you not take a stand against the terrible things being said about Jews, and this in Germany?”

Chancellor Angela Merkel called the remarks an “attack on freedom and tolerance we cannot and will not accept”. Archbishop Reinhard Marx of Munich, head of the Catholic Bishops’ Conference, said: “Jesus was also a Jew – anti-Semitism has no place in Christendom.”

All eyes yesterday turned to Berlin’s long-planned Al Quds March, initiated by Iran in 1979 as a pro-Palestine, anti-Israel march and held annually in the German capital for 32 years. Organisers urged marchers not to be provoked by “Zionist protestors”, while attacking a “Zionist cartel” in German media and politics.

“We are not against Jews but against Zionist fascism,” said an organiser, urging marchers “not to shout anti-Semitic slogans or hold decapitated dolls’ heads in television cameras”.

Across the road, local Rabbi Yitshak Ehrenburg said German opinion was being poisoned by “one-sided television reports dominated by Gaza, with only tiny clips of the situation in Israel that don’t show the fear the Hamas rockets cause”.

“People hear about Israel striking Gaza hospitals or mosques, but not about the Hamas bunkers and tunnels under them,” he said.

So what should ordinary Germans do, or think? Kai Mommsen (47) decided to join the pro-Palestine march.

“As Germans we have a particular responsibility to Israel,” he said, “but Israeli injustice against the Palestinians is just too great.”

“I was torn about which demo to join,” said David Meier (23). “No one side is all right and all good, but the risk of anti-Semitism on the other side makes me side with Israel.”