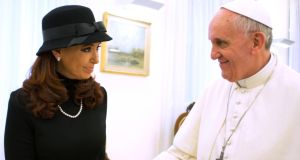 
When Jorge Mario Bergoglio was elected Pope Francis a year ago no one could have predicted the seismic impact the 76- year-old cardinal of Buenos Aires would make on the world stage.

It has made him a national icon in his native Argentina. In Buenos Aires, where as archbishop he was notorious for his “funeral face”, photos of his kindly smile hang everywhere. In a society scarred by a long economic decline and the noxious corruption of its leaders he is the Argentinian who commands a global audience, not because of his skills on a football pitch but through his humility, his simplicity and his defence of the vulnerable.

But for some Argentinians the pope pointedly remains Bergoglio rather than Francis. They still want to know what he did – or did not do – during Argentina’s Dirty War between the military dictatorship and its left-wing opponents during which the state murdered more than 10,000 people.

Such Argentinians include Estela de la Cuadra, whose family suffered more than most during the dictatorship: five of her family members were “disappeared”. Among those she never saw again were her husband, a brother-in-law and her sister Elena.

Elena was pregnant when she was snatched in February 1977. Her parents reached out to a family contact in Rome, the superior general of the Jesuits. He promised to help them and sent Elena’s father a letter of introduction to the head Jesuit in Argentina, 40-year-old Fr Jorge Mario Bergoglio.

Ms de la Cuadra has the letter Fr Bergoglio wrote to a bishop in La Plata asking him to help the family. Eventually they received news: Elena was gone forever but had given birth to a daughter Ana before she was murdered. The baby had been adopted. “My parents were told there was nothing more that could be done,” says Ms de la Cuadra.


Illegal adoptions
What makes her cynical about the pope’s emergence as one of the world‘s leading moral voices is that in testimony he gave in 2010 to a court investigating the military’s crimes Bergoglio, by now archbishop of Buenos Aires, said he had become aware of the military’s illegal adoption of hundreds of children born to women it had disappeared only “10 years before”, correcting himself to say he had become aware of the campaign to recover the children during the first trials of the military leadership in 1985.

“It is a lie, because he met our family about this very issue during the dictatorship,” says Ms de la Cuadra, who says her father told Fr Bergoglio his daughter was pregnant.

In a 2011 signed statement Cardinal Bergoglio said he was not told the disappeared woman was pregnant. But even so his claim of ignorance about the plight of pregnant detainees is hard to reconcile with the role played in publicising the issue by Ms de la Cuadra’s mother and the other founders of the Mothers of the Plaza de Mayo, the group that campaigned for information about their missing loved ones.

Despite censorship they managed to get the issue covered by media during the dictatorship – Ms de la Cuadra has an archive of articles the mothers managed to place in Argentinian and international newspapers.

“And this intelligent man says he knew nothing about it?” she asks incredulously.

“Bergoglio was bright and ambitious and a good politician, he saw where the power was and worked to stay in with the military,” says Rodolfo Yorio, another of the pope’s critics. Mr Yorio’s brother Orlando was a young Jesuit working in a Buenos Aires slum in 1976. In the minds of the military such activity was subversive and Fr Yorio and his colleague Fr Franz Jalics were disappeared in 1976 along with several lay catechists.

The priests survived five months of secret detention. Their lay colleagues did not. Fr Yorio later came to believe the military had kidnapped the group after Fr Bergoglio had lifted his protection after they had defied his orders to quit working in the slums.

“Today Bergoglio talks of helping the poor, being closer to the poor,” says Rodolfo Yorio. “But when priests under his command were doing exactly this he lifted his protection from them. Without that the military could not act.”


Vehement denial
Pope Francis has vehemently denied that he gave the military the green light to disappear the group and has said he worked to have his two priests released.

Before Francis was elected pope, the cases the de la Cuadra and Yorio families mounted against him were backed by the human rights community in Argentina, for whom Cardinal Bergoglio was head of a hierarchy that had supported the dictatorship. In 2007, Hebe Bonafini, head of the Association of the Mothers of the Disappeared, labelled Cardinal Bergoglio a fascist and “the return of the dictatorship”.

But since his election the association, like other rights groups, has mellowed. “It seems he is going to change the culture of the church,” says Evel Petrini, one of the association’s mothers. “The decisions he is taking appear to be good. But we do not know if we can trust him.”

Pope Francis has never been charged with any crime related to the Dirty War. His many defenders say he worked in very difficult circumstances to save people targeted by the military, such as Spanish priest José Caravias, who says he was rescued from a death squad by the pope’s actions.

“What he could do is open the church archives from that time,” says Ms de la Cuadra. “He said he would. But we are still waiting.”